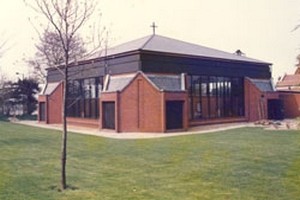 THE CATHOLIC CHURCH IN BALDOCK

After a gap of over 300 years, the first Mass to be said in Baldock was celebrated in a
large room off the yard of the George and Dragon Hotel on 9 th February 1913. Our first Parish Priest, Fr. Basil Barton, built the first church on land adjacent to the Boot public house in the High Street. There was no presbytery.

The third (and present) church was built in 1977 by Father Terence Wardle. To save money, a working party of parishioners built the car park over many
weekends. Leaks in the roof developed in 1987, so a new roof was built by Father Robert Holmes-Walker and our distinctive Cross was mounted at the apex.
After a succession of priests, the parish was without a priest for three and half years. The present parish priest is Fr. Denis Sarsfield; this is his eleventh year in the parish. Under his leadership the parish has undergone a renewal. A lot of building work has taken place – the final phase of the work was completed in the summer of 2018 with the heating system renewed and a new floor laid in the church. An extension has been built on to the parish rooms and the sacristy and kitchen enlarged, the parish hall was renovated last year. New floor and heating system was installed in 2018. The parish is growing in numbers but most of all in spirit, with lots of young families attending mass, which is a joy to see.