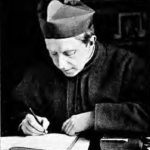 Mgr Robert Hugh Benson (1871 – 1914) was a Catholic priest and writer who lived locally in the village of Hare Street. He helped fund the building of St Richard’s and laid its foundation stone in 1914, but died before building was completed.

Benson was the son of the then Archbishop of Canterbury Edward White Benson and was ordained as an Anglican priest by his father in 1895. Benson converted to Catholicism in 1903 and was ordained the following year.

Benson wrote a great deal of fiction, notably the dystopian novel Lord of the World in 1907, but his works also included historical, horror and science fiction, children’s stories, plays, apologetics and devotional material.

He was buried in the grounds of Hare Street House, and a chapel built over the grave. 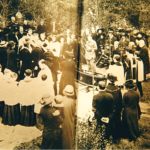