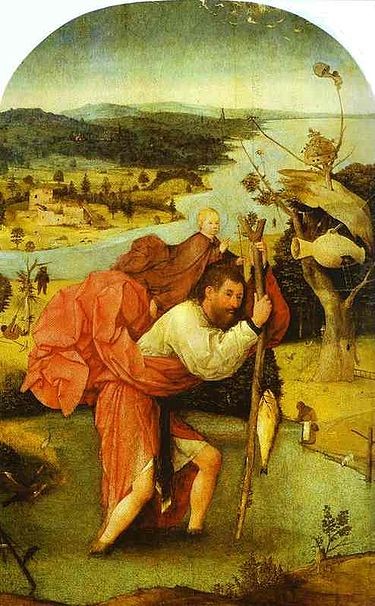 Saint Christopher is venerated by Roman Catholics as a martyr killed in the 3rd-century.

According to the legendary account of his life Christopher was a Canaanite 5 cubits (2.3 m) tall and with a fearsome face. While serving the king of Canaan, he took it into his head to go and serve “the greatest king there was”. He went to the king who was reputed to be the greatest, but one day he saw the king cross himself at the mention of the devil. On thus learning that the king feared the devil, he departed to look for the devil. He came across a band of marauders, one of whom declared himself to be the devil, so Christopher decided to serve him. But when he saw his new master avoid a wayside cross and found out that the devil feared Christ, he left him and enquired from people where to find Christ. He met a hermit who instructed him in the Christian faith. Christopher asked him how he could serve Christ. When the hermit suggested fasting and prayer, Christopher replied that he was unable to perform that service. The hermit then suggested that because of his size and strength Christopher could serve Christ by assisting people to cross a dangerous river, where they were perishing in the attempt. The hermit promised that this service would be pleasing to Christ.

After Christopher had performed this service for some time, a little child asked him to take him across the river. During the crossing, the river became swollen and the child seemed as heavy as lead, so much that Christopher could scarcely carry him and found himself in great difficulty. When he finally reached the other side, he said to the child: “You have put me in the greatest danger. I do not think the whole world could have been as heavy on my shoulders as you were.” The child replied: “You had on your shoulders not only the whole world but Him who made it. I am Christ your king, whom you are serving by this work.” The child then vanished.

Christopher later visited the city of Lycia and there comforted the Christians who were being martyred. Brought before the local king, he refused to sacrifice to the pagan gods. The king tried to win him by riches and by sending two beautiful women to tempt him. Christopher converted the women to Christianity, as he had already converted thousands in the city. The king ordered him to be killed. Various attempts failed, but finally Christopher was decapitated.

St Christopher is a widely popular saint, especially revered by athletes, mariners, ferrymen, and travellers. He is revered as one of the Fourteen Holy Helpers. He holds patronage of things related to travel and travellers.