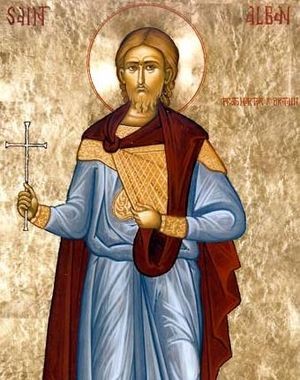 Saint Alban was the first British Christian martyr. Along with his fellow saints Julius and Aaron, Alban is one of three martyrs remembered from Roman Britain. Alban is listed in the Church of England calendar for 22nd June and he continues to be venerated in the Anglican, Catholic and Orthodox Communions. St Alban is mentioned in “Acta Martyrum”, and also by Constantius of Lyon in his Life of St Germanus of Auxerre, written about 480. He also appears in Gildas’ 6th century polemic De Excidio et Conquestu Britanniae and Bede’s Historia Ecclesiastica gentis Anglorum.

According to Bede’s Ecclesiastical History of the English People, Alban was a pagan living at Verulamium (now St Albans), who converted to Christianity, and was beheaded on a hill above the Roman settlement of Verulamium. St Albans Abbey was later founded near this site.

The date of Alban’s execution has never been firmly established. The Anglo-Saxon Chronicles lists the year 283. According to the Venerable Bede: “when the cruel Emperors first published their edicts against the Christians”. In other words, sometime after the publication of the edicts by Eastern Roman Emperor Diocletian in 303 and before the proclamation of the toleration Edict of Milan by co-ruling Roman Emperors Constantine I and Licinius in 313.