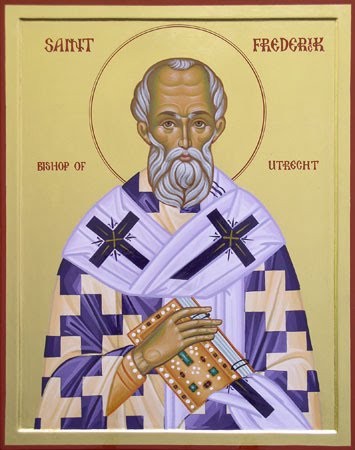 St. Frederick, grandson of King Radbon of the Frisians, was educated by the clergy in his home town of Utrecht in the Netherlands where he was known for his knowledge and piety.

After being ordained to the priesthood Frederick was charged with the care and instruction of converts to the faith. Upon the death of Bishop Ricfried of Utrecht, Frederick was appointed to the post.

The new bishop was zealous in advancing the faith, sending missionaries, including St. Odulf, into the northern areas of his diocese where paganism still flourished. Due to his forceful attack on all forms of sin that he encountered, St. Frederick was not particularly well liked. The most troublesome of the pagan areas, the town of Walcheren, St. Frederick dealt with personally.

He also encountered an enemy in the Empress Judith. She and her husband, Emperor Louis the Debonair, were engaged in a conflict with the emperor’s sons (her step-sons) who claimed that the empress was involved in many gross immoralities including adultery. St. Frederick charitably but forcefully rebuked the empress, for which action he received her lasting resentment.

On July 18, 838, while offering his thanksgiving after Mass, St. Frederick was stabbed to death by two assassins. He died moments later while reciting Psalm 144 “I will praise the Lord in the land of the living.”

Some have speculated that the Empress Judith hired the assassins but it is more likely that they came from Walcheren and were angry at the saint’s attack on their pagan religion.