History of the Church

The Church of St Anselm and St Cæcilia stands rooted in a past which reaches back three hundred years. The present building, erected in 1909, is very much part of the famous Kingsway development of the Edwardian era. On 6th July, 1909, the last Mass was celebrated in the old Chapel of the Royal Sardinian Embassy. From the early nineteenth century, however, the Chapel had become quite openly, what it had been quietly and illegally for some time before, the parish church for British Catholics who lived in the congested area around Lincoln’s Inn Fields. Known as the Sardinian Chapel from 1720, this nomenclature was last used in 1852. In 1853, the Chapel was called after its titular saint, Anselm, and in 1861, the Pastor, Father William O’Connor, added St Cæcilia as the second patron. The Chapel bore this double dedication to a saintly Archbishop of Canterbury, and a virgin martyr of the early church until its destruction in 1909. The present church, successor to the historic chapel, proudly retained the protection of St Anselm and St Cæcilia. Although the old chapel, which, with the Embassy, was an integral part of Lincoln’s Inn Fields. was demolished in conformity to the London County Council’s plans for the new Kingsway (indeed many seventeenth and eighteenth century buildings in the area disappeared between 1905 and 1910), the memories and traditions of the Sardinian Chapel still cluster about its successor.

The present Church of St Anselm and St Cæcilia preserves some of the architectural style of the old Chapel. In addition, it contains some striking reminders of the former Sardinian Chapel. Above the side entrance to the south on an interior wall reposes the Royal Sardinian coat-of-arms. Tradition maintains that the Lady Altar was the High Altar of the old Chapel. During the Blitz, on Wednesday 11th September, 1940 at about 1am, the south part of the Church was bombed with the result that the Lady Altar and the south aisle were damaged. After the war, the ruined chapel and altar were restored. In the church hangs a large painting of the Descent from the Cross reputed by Charles Heckthorn to have been painted by Benjamin West. Rudolph Ackermann, however, felt that the painting had been done by John Marcus Rigaud, RA. In either case, the prevailing opinion is that it was made to replace the altar piece destroyed in the Gordon Riots. In the old Chapel, it hung above the High Altar.

According to an old parchment, which may date from around 1700, the altar stone of the High Altar in the old Chapel, and now in the Lady Altar of the present Church came with its relics from the Lady Chapel of Glastonbury Abbey. Nothing else has yet come to light to substantiate the document. With such treasures from its past, the Church of St Anselm and St Cæcilia is forever reminded that it is the living memorial of three centuries of struggle to maintain the Catholic presence in the area of Lincoln’s Inn Fields. In a very real way, the present Church, situated as it is in the heart of the student and tourist district of Holborn and Bloomsbury, continues the ancient tradition of hospitality established by the earlier Sardinian Chapel, of a prayerful haven to all who enter.

Extracts from ‘The Church of St Anselm and St Cæcilia – A short history’ by John K. A. Farrell.

Since the time of the Royal Sardinian Chapel, predecessor of the church of St Anselm and St Cæcilia, music has been seen as central to the life of this parish. Thomas Augustine Arne, the most distinguished of the Chapel’s musicians, wrote several works for the Sardinian Chapel, including a setting of the ‘Libera me’ which is performed each year on All Souls’ Day, whilst Samuel Webbe and Vincent Novello organised some of the first London performances of the Masses of Mozart and Haydn here. This tradition is maintained by the present musicians, under the Director of Music, Ian Coleman. There are two ‘resident’ choirs: the Schola Cæciliana – a junior choir drawn from local schools, who sing at the 10am Mass, and the Schola Anselmi, a group of more advanced singers, who sing for the 12 noon Latin Mass, and for major fest-days. If your child is aged between 7 and 11 and would like to join the Schola Cæciliana, or if you are a good singer who can read music and would like to sing with the Schola Anselmi, please contact Ian Coleman on iancoleman@operamail.com 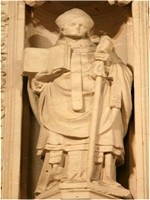 ANSELM, bishop and theologian. Born at Aosta, c.1033; died at Canterbury, 1109; canonized 1720. He was in the Benedictine monastery of Le Bec in Normandy for around thirty years. In 1093, he became the Archbishop of Canterbury and Primate of England. He is called the Father of Scholastic Theology. In his defence of the Church, he suffered much, including exile. His doctrinal works are among the most noteworthy examples of theology and medieval mysticism. Feast day 21st April. 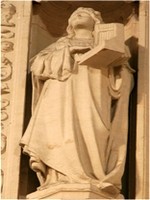 CÆCILIA, martyr. (3rd century). Cæcilia, patron saint for music, is one of the seven martyr women mentioned in the Roman Canon.

A noble Roman virgin, she was martyred under Marcus Aurelius for her unwillingness to sacrifice to the gods. Feast day 22nd November.