Confession on Saturdays after evening mass or on request 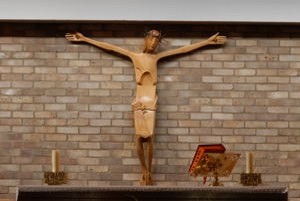 On founding of the parish in 1973, Canon Winston established a link with St Edward’s College in Totteridge, North London, a training centre for the Missionaries of Africa.

Each year two students would come on placement and parishioners would be invited to the college social events and would attend the end of year Mass and Summer barbeque.

When St Edward’s Colllege relocated to Jerusalem in 2006, The Rector, Father Joe Buholzer, presented the Parish with the Crucifix located behind the Altar and the ceramic Stations of the Cross which hang on the Garden wall.

Father Biju was the last placement student who was ordained a priest in Kerala, South India (Father Clive and some parishioners attended his ordination) in September 2006 and is now working in Tanzania. 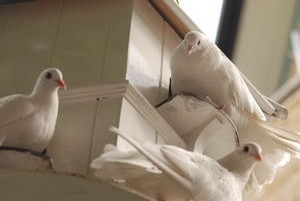 Resident White Doves of the Parish