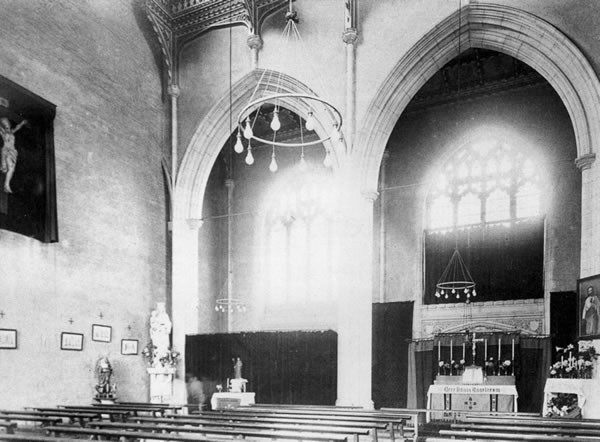 The Benedictine association with this parish in Ealing originates back to 3rd November 1896 when Cardinal Vaughan transferred the parish into the hands of Abbot Edmund Ford, having first offered this mission to them back in 1895, when the foundation stone for Westminster Cathedral was laid.

At that time the Benedictines had been ministering to local Catholics from a house in Acton since 1832.

The Castle Hill House estate, covered what has become Blakesley Avenue, Charlbury Grove and Marchwood Crescent, was up for sale and Abbot Ford bought it and also two acres of land.

Father Bernard Bulbeck, from Downside, took up residence in March 1897 using the conservatory in the house for a make-shift chapel. The house itself was much too large and so was let and the mission’s first priests moved into 2 Marchwood Crescent at the end of 1899.

When the parish was handed over this new mission was not established without opposition. The previous parish priest, Father Richard O’Halloran, refused to give up the parish when instructed to do so by Cardinal Vaughan.

This scandalised the Church and the local community and featured prominently in the local press for some time.

Although this hampered the initial work of he mission, most local Catholics did begin to attend services in the temporary chapel at Castle Hill House.

Abbot Ford, in accepting the mission from the Cardinal, always had in mind to set up a school in Ealing and by 1899 it was noted that the cost of buildings purchased was already £10,000 and a further £5,000 was the estimated cost of the first part of the intended church.

The growth of the mission was hampered by the lack of a school and finally permission having been granted Father Sebastian Cave arrived in late September to start the school in newly acquired property in 39 Blakesley Avenue. At 10.00am on 2nd October 1902 Ealing Catholic School opened to the first three pupils.

The first part of the church was completed by 1904.

By 1915 the parish congregation had reached 800 and in 1916 the status of Ealing was raised to be an independent priory in the summer of that year with Father Wulstan Pearson, from Downside, becoming the first Prior.

A war memorial chapel of the Holy Souls was completed in 1928, balancing the existing Lady Chapel. Plans to construct a further five bays, together with a western front, were helped by a substantial legacy of £25,000 from Mrs Matilda Schwind in 1929.

These additions were built in yellow Guiting stone from a quarry near Cheltenham, faced with Bath stone to match the existing central bays, and completed in 1934 at a cost of £31,000, which excluded the new Compton organ installed at the same time.

On October 1st, 1940 a 1,200lb bomb fell on 5 Charlbury Grove but failed to explode and was not defused until early December. 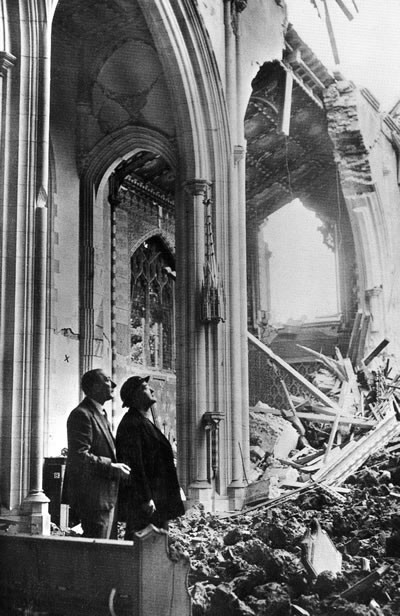 The most severe damage however occurred at twenty-five minutes past nine in the evening of October 7th when a high explosive bomb fell between the Priory Church and the gym, wrecking the organ chamber and damaging the War Memorial Chapel. Another bomb fell through the roof of the church but failed to explode. This one was of the delayed action bombs but the local authorities had more pressing priorities than to defuse a bomb lying in an empty church.

The area was cordoned off and it finally exploded at six o’clock the following morning. It blew up the entire East end of the Priory Church, turning the sanctuary and the choir into a single crater filled with roof and debris. All except two stained glass windows were blown out, the west window was warped by the blast and two or three bays, shaken by the explosion, seemed likely to be demolished.

On 19th December, 1947 Ealing Priory secured its independence from Downside.

Having lost the Compton organ a small Walker organ was purchased and placed to the left of the temporary sanctuary. Repairs began on the church in 1953 with the west Window being restored in 1954.

The Priory was raised to the status of an Abbey, by the Pope on 26th May, 1955, with Prior Charles Pontifex becoming the first Abbot of Ealing. A serious car crash resulting in multiple injuries the following August led to the election of Father Rupert Hall as the second Abbot on 25th February, 1956. 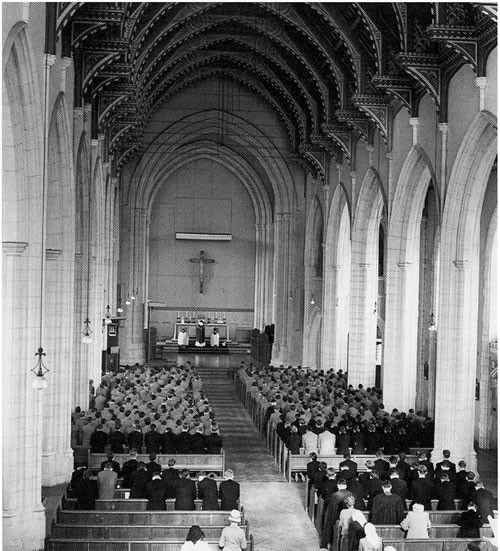 Full restoration work on the church was not started until September 1957 and was completed in 1962. It was opened officially with a Pontifical High Mass on 11th July, 1962, attended by Cardinal Godfrey with the sermon being preached by Abbot Bryne of Ampleforth, Abbot President of the Benedictine Congregation. Thus the first monastic church in London since the reformation was finally complete again.

In 1967 Abbot Francis Rossiter became the 3rd Abbot of Ealing and presided at the school’s 75th jubilee Pontifical Mass with Cardinal Hume. In 1991 Abbot Laurence Soper became the 4th Abbot and during his period as Abbot put in place the final development of the Church with the extension to the new choir stalls and the new Lady Chapel. He was followed by Abbot Martin Shipperlee as 5th Abbot in 2000.

On 1st September 2012 ‘Saint Benedict’s School Ealing’ was established as a seperate Charitable Company Limited by Guarantee. Monks continue to serve on the staff of the school and the Abbot and two of the Monastic Community are members of the Governing Body.