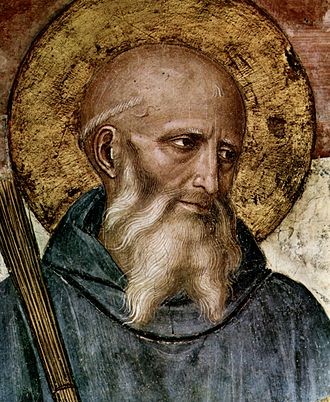 Benedict of Nursia (c. 480 – 21 March 543 or 547) is a Christian saint, honoured by the Catholic Church and the Anglican Church as the patron saint of Europe and students.

Benedict founded twelve communities for monks at Subiaco, Italy (about 40 miles (64 km) to the east of Rome), before moving to Monte Cassino in the mountains of southern Italy. The Catholic Order of St Benedict and the Anglican Order of St Benedict are of later origin and, moreover, not an “order” as commonly understood but merely a confederation of autonomous congregations.

Benedict’s main achievement is his “Rule of Saint Benedict”, containing precepts for his monks. It is heavily influenced by the writings of John Cassian, and shows strong affinity with the Rule of the Master. But it also has a unique spirit of balance, moderation and reasonableness and this persuaded most religious communities founded throughout the Middle Ages to adopt it. As a result, his Rule became one of the most influential religious rules in Western Christendom. For this reason, Benedict is often called the founder of western monasticism.