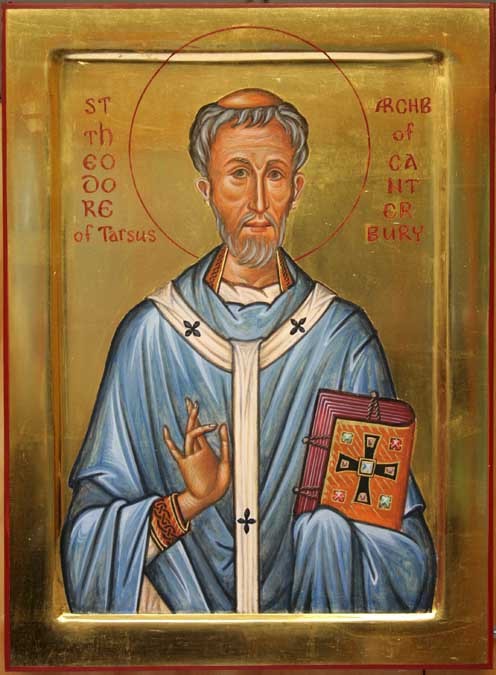 Our Saint Theodore (for there are several) is most often called ‘of Canterbury’ here in England but elsewhere he is called Saint Theodore of Tarsus simply because that was where he was born – in Cilecia (circa 604) – and also because he never set foot in England until he was 66 years old. Theodore was the sixth Archbishop of Canterbury after Augustine. David Farmer writes in the Oxford Dictionary of Saints that he ” was probably the most important archbishop of Canterbury between Augustine and Lanfranc both for his organization of the Church in England and as a scholar and teacher”.

Theodore was educated in Athens and had become a monk before travelling to Italy. He was a scholar of repute in the community of the Church in Rome but had never been ordained. He was brought to the attention of Pope St. Vitalian who was having difficulties filling the vacancy at Canterbury owing to tensions that had arisen following the Synod of Whitby (664).

Theodore was duly ordained priest and bishop and was sent to Canterbury where he came in 669. Within 3 years, following visitations to most parts of the country, he called the first synod of the Anglo-Saxon Church at Hertford (672) with the purpose of healing the rift that had occurred between bishops of Roman and of Irish training and also between bishops and monasteries and their mutual rights.

However, when he took decisions to create more dioceses, his diplomacy and tact failed him and he managed to alienate particular figures in the English Church, most notably Wilfred who appealed to Rome and won its support. Historians agree, nevertheless, that Theodore’s judgements overall were flawless. To quote from Farmer again “Theodore’s work was one of unification of disparate elements in the Church, of fusing elements from Rome, Gaul and Ireland into a single cohesive whole”.

Theodore had upheld all the decisions of Whitby and England was given the traditional Roman territorial episcopate as opposed to the Celtic style of monastic jurisdiction. Church historian N. C. Eberhardt writes “St. Theodore’s influence on the political evolution of England cannot be overestimated… the English political system, inherited by the United States owes more to Roman Catholic than to the secular institutions of the Roman Empire” (Catholic Church History – VII 56 Harmony Media).

Theodore died at the age of 87 and was laid to rest at the side of St. Augustine in Canterbury. This aged prelate from distant shores had won the affection and esteem of the people of the whole land. St. Bede says of him that he was the first Archbishop of Canterbury willingly obeyed by all of Anglo-Saxon England.