The Church is built in the Early English Gothic style and consists of nave, north and south aisles, north and south transepts, chancel and baptistry. The building is faced with Kentish Rag Stone with buttresses, windows copings and entrances of hard white Portland Stone. A fuller history of the Parish can be found here: Parish History

The current instrument was installed in 1960 and was built by J.W.Walker and Sons. It is a two manual and pedal organ with thirty stops.

At the front of the church in the south aisle the statue of Our Lady may be seen now above the Lady Altar. This gift from Cardinal Wiseman is one of two items that survive from earlier buildings, the other being the bell on the outside of the church. In the north transcept there are two statues, one of St. Joseph, the other of St. Anthony.

The stained glass windows in the church are predominantly the work of the artist Hardman. In the south aisle there are three windows put in by Canon Coote; St. Francis de Sales; the English Martyrs; and the window giving thanks for the preservation of the church in the Second World War dedicated to St. Francis of Assisi. The St. Therese window in the south transept is the work of John Trinick. The north aisle contains windows in memory of various parishioners. In 1999, to celebrate the 150th anniversary of the parish, a new window was commissioned by Matthew Lloyd-Winder.The original sketches were drawn by Sheila Barr. The window depicts the figure of Christ in glory and was blessed by Bishop Vincent Nichols, Auxialliary Bishop of Westminster, during the Jubilee Year.

Blessed Dominic Barberi, who received John Henry Newman in to Full Communion with the Catholic Church, celebrated his first Mass at this parish. The remains of the altar on which that Mass was celebrated are incorporated in the present-day altar constructed of ‘beer’ stone and mounted upon a Portland stone plinth. The altar itself is a single piece of Roman Marble from the San Stephanio quarries of Italy. The altar was designed by Mr. Edward J. Welters in the decorated style of Gothic architecture. Behind the altar at the back of the sanctuary are three divisions separated by stone mullions. In the outer two divisions, moulded stone panels have been inserted enclosing carved emblems of the Passion of Christ. In front of these are the two shelves recessed in the centre to receive the Tabernacle, which is flanked either side by tracery panels with shields bearing the monogram (in Latin and Greek) “I.H.S.” 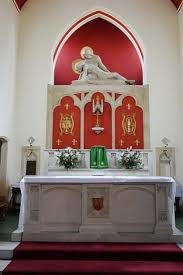 Above the altar is a copy of the “Pieta” carved by Philip Lindsey Clark. It is considered to be one of his finest works.

Below are pictures of other stained glass windows in the church.