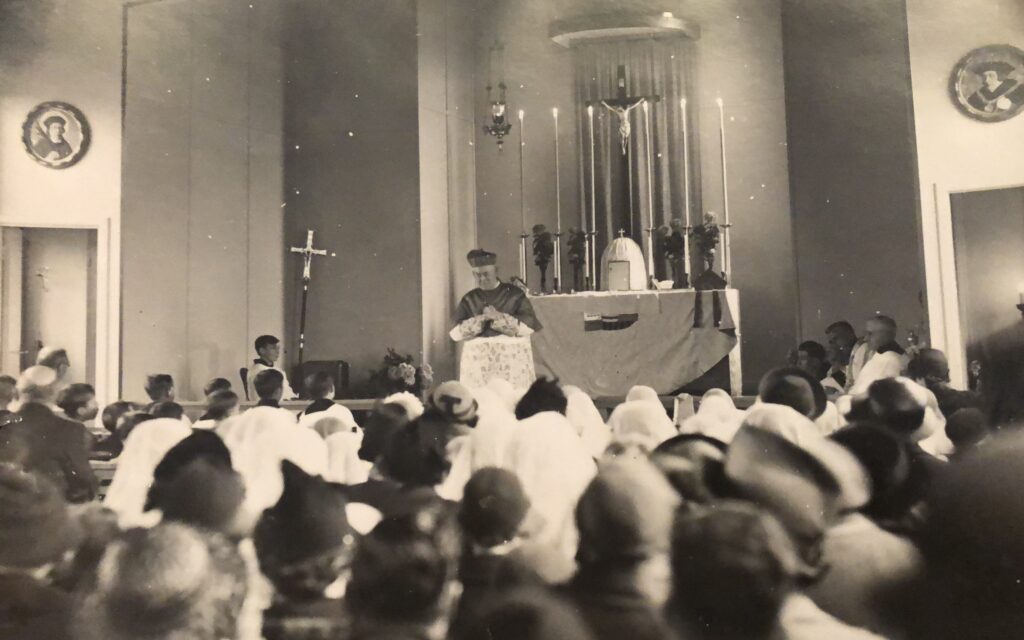 Although Perivale, as we know it today, was being rapidly developed in the early 1930s, there was no Catholic Church for people who were coming to live in what had been a rural community.

During the 1930s, Mass began to be celebrated in Perivale at a Mass centre set up in the Paines & Byrne factory in Bilton Road, which was owned by two active Catholics. The last job on Saturday, when work was finished, was to set out the chairs and kneelers ready for Sunday Mass. The celebrant Rev. H. Treacy came to Perivale from Greenford Parish. He died in 1983 at the age of 100!

In October 1937, Fr. Walter Ormiston, the first Parish Priest, came to live at 41 Langdale Gardens. On the feast of Christ the King he said his first Mass at the Mass centre with a congregation of 120. During the week, Mass was said at the house of Mr. & Mrs. Joseph O’Dowd, 56 Langdale Gardens, and sometimes the congregation would number as many as 50! By early 1938 the temporary wooden Church designed by Mr. John Sterrett was ready and on Sunday, February 27th the first Mass was celebrated. The first wedding in a Catholic Church in Perivale for 400 years was performed the following Easter Monday.

In 1942 Fr. Ormiston was moved and Fr. Joseph Barratt became the new Parish Priest. Unfortunately on 5th July 1948, when he did not arrive as expected to celebrate Mass, a Lady parishioner went to the house to find him. He had died suddenly during the night of a heart attack.

The Rev. Lancelot Long was the new priest, he came from our Lady of Grace in Chiswick. Fr. Long was in his 60’s when he came to Perivale. He helped the parish to settle down and improve its lifestyle after the war years. In order that four masses could be offered on Sunday morning, a succession of delightful priests, usually Spanish, came from Mill Hill to say Mass. This gave Fr. Long the chance to walk up and down the aisle during the singing of the Gloria and Credo, inviting the congregation to sing up and leading with gusto.
Fr. Long had studied music at the Royal College of music and at Oxford where he obtained a Bachelor of Arts degree in music. In the days when the Catholic Church was renowned for its poor singing, Perivale was an exception.

By 1967 the parish had grown to such a size that a second priest was sent to help and thus began a very happy association between Fr. Long and Fr. Peter Phillips. They were two very English men who always had a great respect for each other. Just before the arrival of the new priest, Fr. Long had bought the adjoining house, no. 42.

Perivale Primary school opened on the Thirlmere Road site in September 1969, with Miss Pat Southgate as the first Head mistress.

On 18th June 1967 a parishioner living at 40 Langdale Gardens awoke to see flames coming from the Church. The fire brigade was quickly called and by their efforts the Church was saved, though very badly damaged. Nevertheless it was patched up and ready for use again on the following Sunday. It was discovered that intruders had used hymn books to start fires at each end of the Church. It was a terrible blow for the parishioners, but plans were began at once to replace it, and as soon as the school was open, Mass was held in the school hall and the old church was demolished. It was time to look forward.

At the same time and as the parish waited for their new Church, the changes brought about by Vatican II were coming into effect. Fr. Phillip was appointed Parish priest and Fr. Long, though retired but still living in the presbytery, began to introduce the changes in the liturgy.
Some people were not keen on the changes. The Mass was said in English! The priest faced the congregation, who had to make responses! The laity was also expected to do more than just responses at Mass. 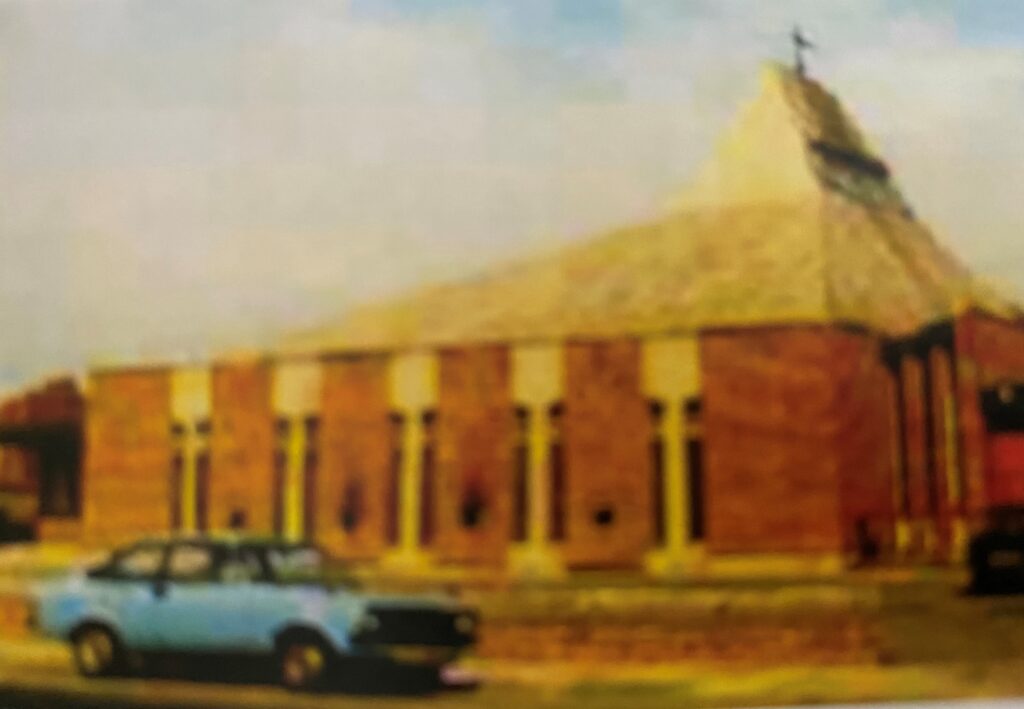 The new Church, designed by Mr. D.B. Kaye, a partner of the late Mr. J. Sterrett, and built by John Greenwood Ltd., was blessed and officially opened by Bishop Casey on 3rd July 1970. The church had, of course cost, a great deal more than the first one, the deposit was paid off by June 1973. The new Church was consecrated on 22nd June by Bishop Mahon, with Cardinal Heenan, Canon Long, Father H. Treacy and Father Phillips in attendance.

Fr. Phillips was moved to Kingsbury Green at the beginning of 1976. Fr. John Coghlan took his place as Parish priest. Until he came to Perivale he had been involved in religious education including radio & television work. Fr. John began modernising the presbytery. The two houses were knocked into one and an extension was added to enlarge the kitchen and make a small meeting room for parish meetings. At the same time a flat was built over the garage for the housekeeper.

Fr. John did not stay long to enjoy the fruits of his labours. He was appointed Rector of the Diocesan seminary at Allen Hall. Fr. Michael Tuck was the next occupant of the big chair. He was practically a local boy having been brought up in Chiswick, where he had served as altar boy for Father Long.
Fr. Michael was the first priest of the post-Vatican school to come to Perivale. He was full of enthusiasm and new ideas, and although some of the older parishioners found it difficult to keep up with all the changes, he worked hard, and somehow managed to involve even more people in the work of the parish. Whether you were for more changes of for keeping the status quo, no one could fail to appreciate the life and happiness he put into the liturgy.

Canon Long died peacefully on 16th April 1978 in Twyford Abbey with Cardinal Hume reciting the rosary at his bedside.

There was by this time too much work for one priest and so began a happy association with several curates, Fr. John Wrenn, a Mill Hill missionary, Fr. Patrick Keegan and Fr. Leo van Doninck, a White Father missionary.

Fr. Michael Tuck left Perivale in September 1983 and Fr. Hugh Bishop came to the parish from Acton. Unfortunately he soon suffered a heart attack and died. Fr. Patrick Sammon was appointed to the parish. He is remembered as a tireless visitor of the sick of any denomination. He loved to go on pilgrimages to Lourdes and the Holy Land. He sponsored the sick to go to Lourdes. He even agreed to go on a sponsored parachute jump, which was finally cancelled due to bad weather!
After fourteen years in 1997, he was replaced by Fr. John Elliott from Shepperton. Fr. John’s first priorities were the growth of the lay ministries and the building up of the community.

On March 3, 2013 the parish of St. John Fisher celebrated the 75th Anniversary of the opening of the wooden Church. The anniversary Mass was presided by Fr. Anthony Sammarco who had been serving in St. John Fisher as Parish Administrator for 8 years since 2006 and retired from active ministry in January 2013. 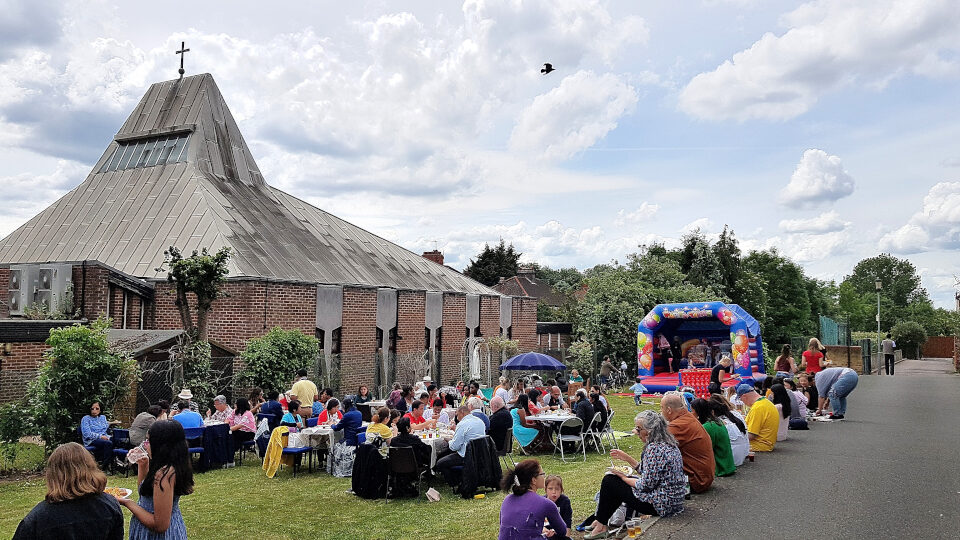