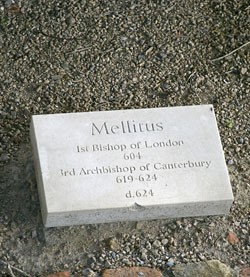 St Mellitus was the first Bishop of London in the Saxon period, the third Archbishop of Canterbury, and a member of the Gregorian mission sent to England to convert the Anglo-Saxons from their native paganism to Christianity. He arrived in 601 AD with a group of clergymen sent to augment the mission, and was consecrated as Bishop of London in 604. Mellitus was the recipient of a famous letter from Pope Gregory I known as the Epistola ad Mellitum, preserved in a later work by the medieval chronicler Bede, which suggested the conversion of the Anglo-Saxons be undertaken gradually, integrating pagan rituals and customs. In 610, Mellitus returned to Italy to attend a council of bishops, and returned to England bearing papal letters to some of the missionaries.

Mellitus was exiled from London by the pagan successors to his patron, King Sæberht of Essex, following the latter’s death around 616. King Æthelberht of Kent, Mellitus’ other patron, died at about the same time, forcing him to take refuge in Gaul. Mellitus returned to England the following year, after Æthelberht’s successor had been converted to Christianity, but he was unable to return to London, whose inhabitants remained pagan. Mellitus was appointed Archbishop of Canterbury in 619. During his tenure, he was alleged to have miraculously saved the cathedral, and much of the town of Canterbury, from a fire. After his death in 624, Mellitus was revered as a saint.