1920’s
In 1925 Cardinal Bourne decided that the expanding population living around West Green Road needed its own church. A site was found and a temporary church was officially opened in 1927.

1930’s
Parish Priest:Fr Henry Bryant 1937 – 1941
For the first ten years the church was served by the Canons Regular of the Lateran, who came over from Stroud Green to say the two Sunday morning Masses. The people rallied together and organised themselves in many ways to create a parish community. A number of groups were established: The St. Vincent de Paul, which helped the many poor people who lived in the area, the Legion of Mary, the Guild of St. Stephen, Girls’ and Boys’ clubs and the Children of Mary. An entertainment committee was set up and dances were held in West Green School and whist drives in peoples homes to help pay off the debt on the church. The nuns from St Mary’s Priory taught children the catechism and prepared them for First Communion and Confirmation. The parish got its first parish priest, Fr Henry Bryant, in 1937 who initially rented a room in a house in Langham Road and then moved into the old house at 4 Vincent Road that was bought by the parish as a presbytery.

1940’s
Parish Priests:Fr John McKenzie 1941 – 1943 Fr Roderick Cuming 1943 – 1974
During the war years the parish remained a thriving community, even though many of the children were evacuated. Services were held earlier in the evenings because of the black-outs, an extra Sunday Mass was said at 12.00 to allow more people to attend church, Fr. Bryant visited bombed families and gave great support to those who suffered in any way. In 1941 he was moved to a larger parish and was replaced by Fr John Ware until 1943, when Fr Roderick Cuming D.D. arrived and became parish priest for the next thirty years. 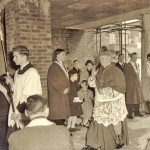 Because of the increase in the number of parishioners the temporary church was extended by the addition of a Nissen Hut, which was first used in 1952. The parishioners continued to collect money for the building of a new church and work began on it in 1957. The old church was dismantled and moved to become the parish hall.

During this time daily Masses were said in the presbytery and Sunday Masses in West Green School hall. The new church was completed in December 1958 and officially opened in April 1959 by Cardinal William Godfrey.

1960’s
Parish Priest: Fr Roderick Cuming
With the church completed the parish turned its attention to constructing a purpose – built presbytery. Fr Cuming bought Nr. 2 Vincent Road and so his house at Nr.4 and Nr. 2 were demolished and a new presbytery was built on the site. 1964 saw the completion of the presbytery, the installation of a new organ in the church and the consecration of the church by Bishop David Cashman in the presence of Cardinal Heenan. As the

number of parishioners was increasing a church was bought from the Methodists in Mattison Road to serve the people of Harringey. Fr Ronald Sheppard was appointed to the church, St. Augustine’s of Canterbury, in 1964. Fr Cuming supported the Servite nuns in their efforts to build a new school. In 1966 St Mary’s Priory School was opened. Fr Ignatius Tonna arrived as assistant priest in the parish in 1966 and stayed for over eleven years. He was instrumental in organising the renovation of the church with the help of parishioners, whom he rewarded with his home brewed wine.

1970’s
Parish Priests: Fr Roderick Cuming – 1974 Fr Leslie Cole 1974 – 1981
During the 1960’s and 1970’s the ethnicity of the parish community began to change as more and more immigrants arrived in the Borough of Haringey. From being a predominantly white parish, with mainly Irish but also Italian and Polish parishioners, the parish community began to embrace parishioners from all around the world with over 25 different nationalities represented. In 1974 the parish finally got its own school when, after many years of fund raising, St John Vianney’s Primary School was opened in Stanley Road, near the church.

1980’s
Parish Priests: Fr.Michael Higgins SMA Fr Dermot McCaul SMA
In 1981 the SMA fathers took over the running of the parish. The SMA are a missionary congregation, who traditionally work in Africa, but it was felt that with their experience of other cultures and societies they had plenty to offer the multi-racial community in Haringey. The first SMA parish priest was Fr Michael Higgins and the first assistant priest was Fr Cornelius O’Driscoll, who stayed in the parish for 20 years. In 1985 the Missionary Sisters of Our Lady of the Apostles (the OLA’s) – Sr Joan Murray, Sr Finbarr and Sr De Pazzi – arrived in the parish to help. They too had worked in Africa and were able to understand the needs of parishioners from ethnic minorities. During the Pope’s visit to England in 1982 parishioners were able to attend Mass at Wembley Stadium and at Coventry Airport.

St John Vianney’s became a meeting place for SMA fathers travelling to and from Africa. Many stayed for short periods of time, serving the parish and being made welcome there. The parish hall was burnt down by vandals in 1991, when the parishioners were enjoying a fair at the primary school. The hall had to be demolished and two temporary halls were erected in its place. After much negotiation the parish was able to purchase the notorious pub next door and work began on refurbishing it. It was finally opened to the parish and local community.
Sr Mary Agnes joined the parish in 1996 to become part of the Parish team.
Fr Edward Deeney SMA also joined the Parish team.

The SMA fathers sadly left the parish in 2003 because of a drop in vocations and the parish was once more to be served by priests from the Diocese of Westminster.
Fr Joe Ryan arrived in the autumn of 2003 and in the short time he has been parish priest has already managed to significantly lower the debt on the parish centre. The parish is taking part in the Westminster Renewal Programme – At Your Word Lord. The parish continues to thrive with many active organisations, with over 1000 people attending Mass each Sunday and between 40 – 80 at Mass each week day.