Hal, or Halle, is a small town in Belgium that came to be connected to Our Lady and to Camden Town and although the Belgian connection with Camden Town dates only from 1922, England and Belgium have been closely linked for many centuries.

From the 13th century the wool trade between the two countries was enormous and merchants, sailors and workers were constantly travelling back and forth. In particular, the Belgian town of Halle had a special importance for the English, for England was famous throughout Europe for its devotion to Our Lady and was known as the “Dowry of Mary”. And Hal had a very special place in the hearts of all those who loved the Virgin. 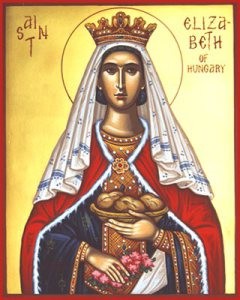 In 1267 the sainted queen, Elizabeth of Hungary, presented a statue of Our Lady to the church of St Martin in Halle. From the beginning the statue was especially venerated because of the love and respect in which St Elizabeth was held. It quickly became a much-loved shrine and pilgrims flooded in from all over Europe. Foremost amongst them were the English of every class and level. The royalty of England became a familiar sight to the people of Halle as they came to pay their respects to the Virgin (and possibly to cement their trading relations).

Henry VIII (still in his Catholic days when he earned himself the title of Defender of the Faith) presented a magnificent silver monstrance to the shrine. It is still in use today! 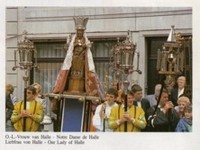 The fame of the shrine became even greater thanks to the miraculous help the statue gave during the seige of Halle by a protestant army in 1580. The enemy cannonballs were caught in the folds of the Virgin’s robes and the church and the town were saved. Today, when you visit the church you can see the last 32 of the 500 cannon balls that bombarded the town and you will notice that the Virgin is now a black Madonna as a result of the smoke that enveloped her during the siege. 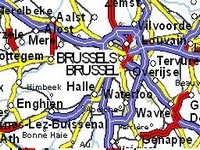 Modern Hal is a prosperous town just outside Brussels on the old southern road to Mons and then on to France. It is in the Flemish speaking province of Brabant and is the National Pilgrimage Centre of overwhelmingly Catholic Belgium. It is sometimes known as Mariastad or Mary’s City. Thousands of the faithful still flock here every year and the biggest event is in September when the pilgrims progress around Hal stopping to pray at each of the mini-chapels that are dotted around the town.

It was a different story in 1919. After the 1st World War Belgium, the cockpit of Europe, lay devastated. The Belgium’s are one of the great missionary peoples of Catholicism (remember Fr Damien of Molakai) and the Missionary Fathers of Scheut, also known as the Congregation of the Immaculate Heart of Mary, were determined to establish a base from which they could direct their missionary efforts and be safe from the disruption of invasion. Their eyes turned towards their wartime ally – Britain. Many Belgian refugees were already resident in London and a church here would serve the double purpose of being a refuge for the Belgian community of London and a base for missionary activities.

They explored London and eventually settled on a site in Camden Town. They were impressed by the cheapness of the property market here!!! They built a small chapel (the Little Hut) on the opposite side of the road from the present church and threw open their doors to the local Catholic community in early 1922. It was the first Catholic church in the immediate area and was soon bursting at the seams, particularly as the Irish became the dominant migrant group in Camden town. 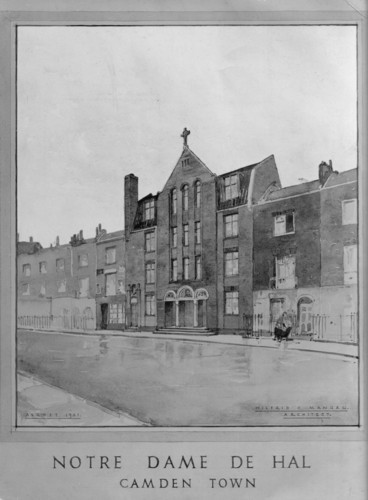 By 1933 the Belgian Fathers felt a permanent Church was justifiable and they commissioned the Irish architect, Wilfred Mangan, to design and build a place of worship for them that would reflect its Belgian origins. The Fathers did not forget where they came from. A copy of the original, miraculous statue that still stands as protectress of the people of Hal was placed in a chapel in the south side of the church and the result is the Our Lady of Hal that we know today.

The Belgian connection lasted right into recent times and many of us will remember the Belgian clergy that served Camden so well (see ‘Scheut Fathers’ page).

Our Lady of Hal is now a vigourous and energetic parish and part of the mainstream of the Diocese of Westminster – thanks to the dedication of those Missionary Fathers of Scheut; to the devotion of the Belgian people of Our Lady and to the Belgian Connection.