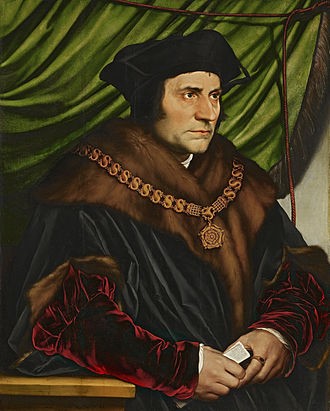 He was an important councillor to Henry VIII and Lord Chancellor from October 1529 to 16 May 1532. More opposed the Protestant Reformation, in particular the theology of Martin Luther and William Tyndale whose books he burned and whose followers he persecuted. More also wrote Utopia, published in 1516, about the political system of an ideal and imaginary island nation.

It was a happy coincidence that we celebrate the Feast of our Patron, St Thomas More, just days after the country celebrated the writing of the Magna Carta in 1215.

At his trial for high treason More invoked the Magna Carta as a justification for his  refusing to swear to the Act of Succession which would effectively have condoned King Henry VIII’s religious settlement making him supreme Head of the Church of England.    He invoked the first Clause of the Magna Carta, quoting it in Latin, which said  that  the English Church shall be free, and shall have its rights undiminished, and its liberties unimpaired – He went on to claim in his defence that Henry’s reforms were ‘contrary both to the ancient laws and statutes of our own Realm, not then repealed, as they might well see them in Magna Carta’.

The result of the trial was a forgone conclusion, and More’s defence was not accepted, but it was by no means an outlandish defence.    We know that in the works of Thomas Cromwell, the King’s religious enforcer, there is a note to look up the Magna Carta        and what it said about the freedom of the Church.   So More’s opponents must have been concerned about his argument, though they chose to ignore it.    As far as More’s judges were concerned, what counted was that the majority of the bishops, universities and the learned men in the Kingdom were prepared to go along with the King.   Sentiment and fear made it possible not even to consider Magna Carta as a serious argument.

In quoting Magna Carta St Thomas was not asserting the rights of the Church to dominate the state but the rights of all not to be oppressed by arbitrary acts of power by those in a position to exercise it.     The freedom of the Church was the guarantee, so to speak, for the freedom of all.   If the Church is doing its job it should speak out against arbitrary acts of power.   Magna Carta emphasises the importance of the rule of law, but its deeper sentiments are not just political but undergirded by biblical and Christian faith.    The idea that the king should obey the his own laws and the law of God goes way back to the Old Testament, especially the stories about the rise of kingship, and its dangers, in the First Book of Samuel.

We need government and we need laws if we are to thrive, but lawgivers and governments are also subject to a higher power, because human weakness makes it possible for governments and lawgivers to act in their own interests or in the interests of their friends rather than the people they govern.    This is not something governments want to hear, any more than Henry VIII did.  St Peter urges his Christian community to honour the emperor but to fear God, and Jesus tells us to give to Caesar what belongs to Caesar, and to God what is God’s.

In practice that is easier to say than to do, but the fate of St Thomas More reminds us that there will always be occasions when Christians will be compelled by their conscience to draw a line in the sand and speak the truth to power.   As More well knew, discretion and silence is no protection against power.    More kept a discrete silence as long as he could, but in the end power was determined to flush him out, and then More had his say.   His death speaks volumes.   As the gospel of the day reminds us, being a Christian does not give us the right to live in earthly  peace, but the opportunity to gain eternal life through taking up our cross when God calls us to do so.