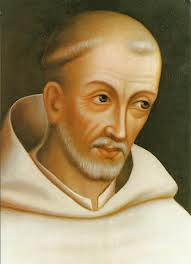 St. Bernard, Abbot and Doctor of the Church was born of noble parentage in Burgandy, France.  He joined the Cistercians at the age of 22.  He was well educated and so passionate about his faith that he convinced his brothers, his uncle and many of his friends to join him at the Abbey.  He later established another monastery with 12 other monks which came to be known as Clairvaux, (Valley of Light).

St Bernard knew how to harmonise the contemplative life with important missionary work.  However, the Saint’s strict observance of silence and contemplation did not impede him from living a very intense apostolic life.

He became widely known throughout Europe and was consulted by Popes and political leaders.   He was commissioned by Pope Eugene to preach the second Crusade and he travelled throughout France and Germany arousing great enthusiasm for the holy war.  The failure of the expedition raised a great storm against the Saint, but he attributed it to the sins of the Crusaders.

He died in 1153 and was canonised less than three decades later.