We are a Roman Catholic parish serving the communities of Stroud Green, Crouch End and Hornsey in North London.

The parish was founded by the Augustinians – Canons Regular of the Lateran or CRL in 1884. Today we are part of the Archdiocese of Westminster.

The parish mirrors the diverse makeup of London with many, many nationalities represented among our congregation.

Through faith and service to build the kingdom of God proclaimed by Jesus Christ.
We will:

Our parish is fortunate to have two schools as part of a local community – St Peter in Chains for infants and St Gildas’ for juniors. Today the schools operate as “The Federation of St Peter’s and St Gildas’ Catholic Schools”.

The best place to start to find out about the schools is on their website https://stpetersandstgildas.co.uk/

St. Peter-in-Chains Parish is bounded by Priory Road and the High Street to the north; the main line railway to the east; Park Road, The Broadway, Crouch End Hill and Hornsey Rise to the west; and the Gospel Oak to Barking railway as far as Stapleton Hall Road, then the Parkland Walk to the south.

In July 1892, the Catholics of Stroud Green, Crouch Hill and Finsbury Park – about 200 – were “sadly in need of a church”. On August 31, 1893, a meeting was held at Hornsey Rise to consider the feasibility of starting a mission. Stroud Green was at that time largely a rural suburb with cornfields on the slopes of the hills. A group of lay people formed the Stroud Green Catholic Association and petitioned the Archbishop of Westminster to give them their own parish, church and priest.

Meanwhile, a community of male religious, the Canons Regular of the Lateran, were anxious to establish a foundation in London. Before the Reformation, the Canons Regular were well distributed throughout these islands but all was swept away with the dissolution of the monasteries. They survived in continental Europe but, in the 19th century, they suffered greatly from revolution and anti-religious laws. In 1881, the Canons had made a foundation in Cornwall and, now, the hope was that the traditional way of life – of priests living together under a Rule and sharing their goods – could be restored in London. The superior at the time petitioned the Archbishop, who gave permission in 1894 for the order to undertake pastoral responsibilities in this part of the Diocese.

Coombe House at the corner of Womersley and Dashwood roads was purchased and the first Mass was celebrated in November 1894. The Canons renamed the building St Augustine’s – a name that can still be seen over the front door – and this became the Priory, now numbers 10 and 12 Womersley Road. Plans were drawn up and fund-raising began – a constant feature of parish life through the ages! Fr. Belton was the founding priest, and the first Prior was Fr. Augustine White. The Lady chapel was built first in 1886 and the church, designed by Canon Scoles, was opened on Tuesday October 21st 1902 with the sanctuary, with the altar against the wall and the tabernacle in the centre, completed by 1908. There were attendances of 473 in the morning and 125 in the evening on one Sunday in 1903. 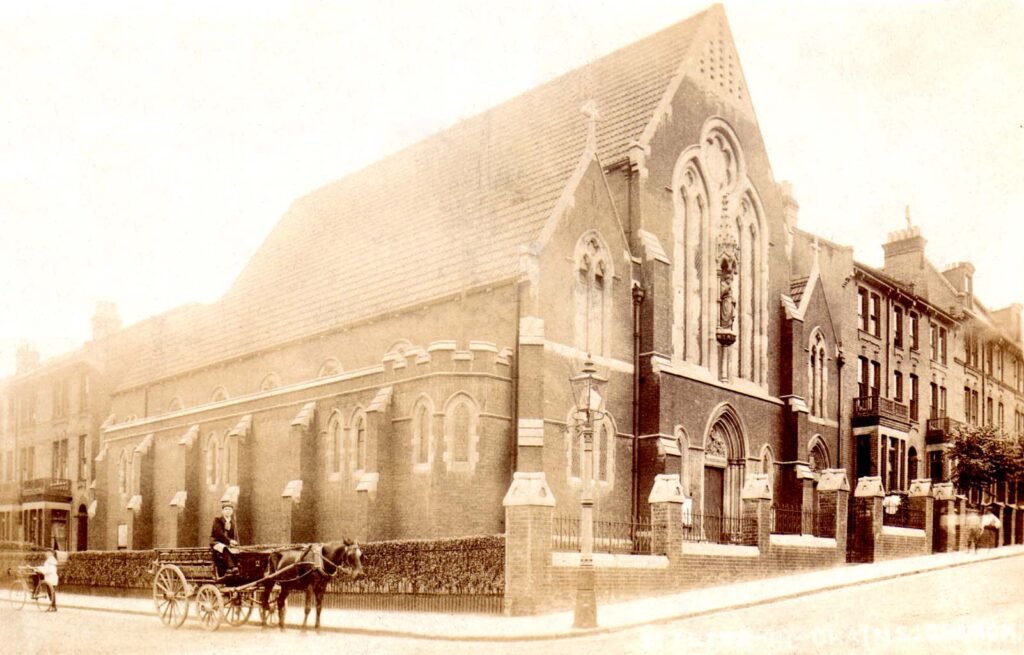 The education of the young is always an important feature of parish life and St. Peter’s has benefited from the generosity and dedication of the Sisters of St. Gildas who came to the parish in 1914 and quickly established their own school. Later, the parish felt the need to have its own school and, once again, through hard work and committed lay initiative, the funds were raised which resulted in the foundation of our two schools, St. Peter’s for infants and St. Gildas for juniors. The original St. Peter’s school opened in 1934 and was rebuilt during 1967/68.

Once St. Peter-in-Chains was firmly established, we were able to assist in setting up other parishes at Tollington Park, West Green, Harringay and Eltham.

In 1964, the parish obtained planning approval for the building of the current outside porch which has proved so valuable as a space for parishioners to meet. As with many such projects, there was much involvement of parishioners in the work.

Without a parish hall once the schools were established, there was, at around the same period, much discussion about the value and feasibility of converting one half of the basement of the Priory – number 12 – into a meeting space and of building a small Parish Centre at the back of the Priory. Though the parish applied for outline planning permission, only the work to create the basement Parish Rooms we have today was carried out.

In the mid-1980s, once again under the supervision of a marvellous lay team, renovation and re-ordering of the church took place and, after sterling fundraising efforts, the inside of the church was redecorated in 2003.

1994 saw a year of celebrations to mark our centenary and the parish also played its full part as the church prepared to greet the third millennium. A decade on and many of the ‘At your Word Lord’ groups set up then are still running.

The Priory had been the Canon’s house of formation and the parish was blessed with the company and the service of some wonderful students who went on to become priests over the years. However, fewer vocations led to the order having to discern how best it would continue to meet its mission in the new millennium and, with much sadness, the order decided to withdraw from the parish to concentrate its mission in London at Eltham. Father Garry Murphy was our last Parish Priest under the Canons Regular and he handed over to Father David Irwin, a Westminster Diocesan priest in August 2004 who, in turn handed on to our current PP Fr. Sean Carroll at the beginning of 2010.

Today, the parish reflects the multi-ethnic, multi-cultural nature of the area. Perhaps there is less socialising today than in the past but we are still blessed with a small army of volunteers who undertake all manner of social, pastoral and liturgical ministries in the parish for the glory of God and the continued work of building His kingdom on earth.