Simon Peter or Cephas, the first pope, Prince of the Apostles, and founder, with St. Paul, of the see of Rome. 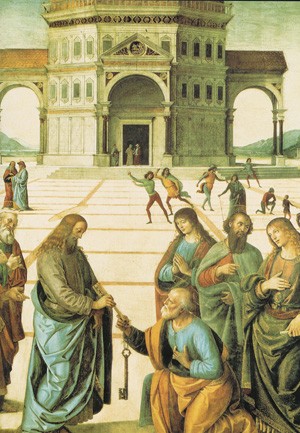 Peter was a native of Bethsaida, near Lake Tiberias, the son of John, and worked, like his brother St. Andrew, as a fisherman on Lake Genesareth. Andrew introduced Peter to Jesus, and Christ called Peter to become adisciple. In Luke is recounted the story that Peter caught so large an amount of fish that he fell down before the feet of Jesus and was told by the Lord, Do not be afraid; from now on you will be catching men. Jesus also gave Simon a new name: Cephas, or the rock. Becoming a disciple of Jesus, Peter acknowledged him as “… the Messiah, the son of the living God. Christ responded by saying: “… you are Peter and upon this rock I will build my church…. He added: I will give you the keys of the kingdom of heaven. Whatever you bind on earth shall be bound in heaven; and whatever you loose on earth shall be loosed in heaven.”

Peter was always listed as the first of the Apostles in all of the New Testament accounts and was a member of the inner circle of Jesus, with James and John. He is recorded more than any other disciple, and was at Jesus side at the Transfiguration, the raising of Jairus daughter, and the Agony of the Garden of Gethsemane. He helped organize the Last Supper and played a major role in the events of the Passion.

When the Master was arrested, he cut off the right ear of a slave of the high priest Malchus and then denied Christ three times as the Lord predicted. Peter then went out and began to weep bitterly. After the Resurrection, Peter went to the tomb with the other disciple after being told of the event by the women.

The first appearance of the Risen Christ was before Peter, ahead of the other disciples, and when the Lord came before the disciples at Tiberias, he gave to Peter the famous command to Feed my lambs…. Tend my sheep…. Feed my sheep. In the time immediately after the Ascension,

Peter stood as the unquestionable head of the Apostles, his position made evident in the Acts. He appointed the replacement of Judas Iscariot; he spoke first to the crowds that had assembled after the descent of the Holy Spirit at Pentecost; he was the first Apostle to perform miracles in the name of the Lord; and he rendered judgment upon the deceitful Ananias and Sapphira. Peter was instrumental in bringing the Gospel to the Gentiles. He baptized the Roman pagan Cornelius, and at the Council of Jerusalem he gave his support to preaching to Gentiles, thereby permitting the new Church to become universal. Imprisoned by King Herod Agrippa, he was aided in an escape by an angel. He then resumed his apostolate in Jerusalem and his missionary efforts included travels to such cities of the pagan world as Antioch, Corinth, and eventually Rome. He made reference to the Eternal City in his first Epistle by noting that he writes from Babylon.

It is certain that Peter died in Rome and that his martyrdom came during the reign of Emperor Nero, probably in 64. Testimony of his martyrdom is extensive, including Origen, Eusebius of Caesarea, St. Clement I of Rome, St. Ignatius, and St. Irenaeus. According to rich tradition, Peter was crucified on the Vatican Hill upside down because he declared himself unworthy to die in the same manner as the Lord. He was then buried on Vatican Hill, and excavations under St. Peters Basilica have unearthed his probable tomb, and his relics are now enshrined under the high altar of St. Peters.

From the earliest days of the Church, Peter was recognized as the Prince of the Apostles and the first Supreme Pontiff; his see, Rome, has thus enjoyed the position of primacy over the entire Catholic Church. While Peter’s chief feast day is June 29, he is also honored on February 22 and November 18. In liturgical art, he is depicted as an elderly man holding a key and a book. His symbols include an inverted cross, a boat, and the cock.