Carmelite of Lisieux, better known as the Little Flower of Jesus, born at Alençon, France, 2 January, 1873; died at Lisieux 30 September, 1897.

She was the ninth child of saintly parents, Louis and Zélie Martin, both of whom had wished to consecrate their lives to God in the cloister. The vocation denied them was given to their children, five of whom became religious, one to the Visitation Order and four in the Carmelite Convent of Lisieux.

Brought up in an atmosphere of faith where every virtue and aspiration were carefully nurtured and developed, her vocation manifested itself when she was still only a child.

Educated by the Benedictines, when she was fifteen she applied for permission to enter the Carmelite Convent, and being refused by the superior, went to Rome with her father, as eager to give her to God as she was to give herself, to seek the consent of the Holy Father, Leo XIII, then celebrating his jubilee.

He preferred to leave the decision in the hands of the superior, who finally consented and on 9 April, 1888, at the unusual age of fifteen, Thérèse Martin entered the convent of Lisieux where two of her sisters had preceded her.

She was given the habit and received the name: Thérèse of the Child Jesus. On 8 September 1890 Thérèse took her vows; the ceremony of taking the veil followed on the 24th when she added to her name in religion, “and of the Holy Face”, a title which was to become increasingly important in the development and character of her inner life.

In her poem “My Heaven down here” composed in 1895 she expressed the notion that by the divine union of love, the soul takes on the semblance of Christ.

By contemplating the sufferings associated with the Holy Face of Jesus, she felt she could become closer to Christ.

Thérèse’s final years were marked by a steady decline that she bore resolutely and without complaint.

Tuberculosis was the key element of Therese’s final suffering, but she saw that as part of her spiritual journey.

After observing a rigorous Lenten fast in 1896, she went to bed on the eve of Good Friday and felt a joyous sensation. She wrote:

“Oh! how sweet this memory really is!… I had scarcely laid my head upon the pillow when I felt something like a bubbling stream mounting to my lips. I didn’t know what it was”.

The next morning she found blood on her handkerchief and understood her fate. Coughing up of blood meant tuberculosis and tuberculosis meant death. She wrote:

“I thought immediately of the joyful thing that I had to learn, so I went over to the window. I was able to see that I was not mistaken. Ah! my soul was filled with a great consolation; I was interiorly persuaded that Jesus, on the anniversary of His own death, wanted to have me hear His first call!”

Thérèse corresponded with a Carmelite mission in what was then French Indochina, and was invited to join them, but, because of her sickness, could not travel.

On her death-bed, she is reported to have said:

“I have reached the point of not being able to suffer any more, because all suffering is sweet to me.”

Thérèse was buried in the Carmelite plot in the municipal cemetery at Lisieux, where Louis and Zelie had been buried.

However in March 1923, before she was beatified, her body was returned to the Carmel of Lisieux, where it remains. 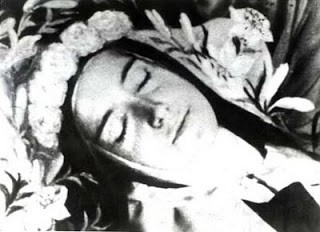