Confessions: on request at present 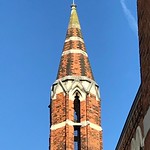 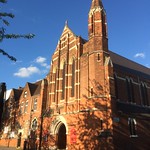 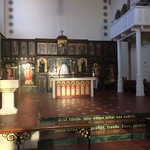 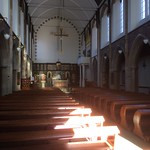 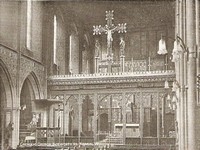 In 1850 there was only one Catholic Church – St Mary of the Angels, Bayswater – within the district extending from Marble Arch to Harrow-on-the-Hill. The Oblates of St Charles, based at St Mary of the Angels, Bayswater, were forced to recognize the necessity of providing for the spiritual needs of a large number of people in the Kensal area. Cardinal Wiseman, Archbishop of Westminster, asked Dr Manning to undertake a mission in Kensal. The Oblates of St Charles began their missionary work in Kensal New Town in 1858, the same year in which St Mary’s Catholic Cemetery, Kensal Green, was consecrated by the Right Reverend Dr Morris, Bishop of Troy. Father Francis Kirk, OSC, undertook responsibility for the spiritual wellbeing of the people.

In 1862 a small two-roomed cottage in Kensal Road provided the Catholic population with a meeting place for the adult population. He gave instruction, led prayers and sang to the accompaniment of a small harmonium. During the day the rooms were used as class-rooms and the wash house at the back was adapted for the use of babies while their mothers went to work.

Mass was celebrated at a later date every Sunday and on Holydays in a three storey corner house. The inner room of what was to be a baker’s shop served as a sanctuary and the shop area was furnished with benches. An altar rail stretched across the entire space. The Blessed Sacrament was not reserved as there was no resident Priest. The chapel held ninety people comfortably. During the week the upper floor became a schoolroom.

Financial worries beset the Church from the beginning. Money was scarce and hampered much good work. Over and over the Parish Priests expressed concern at the lack of financial support.

John Francis Bentley was commissioned to design a larger Church. An iron Church was built in Absalom Road, (now part of Golborne Gardens), with the help of good friends and partly from the private funds of Father Karslake OSC in 1873.

J. F. Bentley was asked to design a more permanent Church in 1880, providing for at least five hundred people, in the plainest manner possible. The site on the corner of Bosworth Road and Hazlewood Crescent was limited, occupying an irregular parallelogram. Bentley was instructed to provide a design in the ‘Roman’ style. His plan covered every inch of the ground. There was no room for buttresses or projections of any kind. Tenders ranged from £5,930.0.0 to £5,133.0.0, the latter being the acceptable one. The Foundation Stone was laid by Cardinal Manning on the 24th May 1881 and within a year the Church was solemnly opened and blessed by him on 13th April 1882. The cost of erecting the Church came to £5,059.0.0. 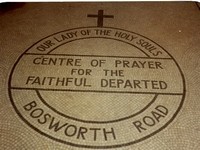 The Church is in the vicinity of the Roman Catholic Cemetery of St Mary’s, Kensal Green, which explains the dedication of the Church. The title – Our Lady of the Holy Souls – suggests “that the principal devotions practised there will have for their object the relief and eternal repose of souls dear to God, yet detained for a time from their great reward.”

St Mary’s Catholic Cemetery was opened in May 1858. The office of Chaplain to the Cemetery was carried out by the Oblates of St Charles. Their services were required morning and afternoon. On Saturdays the average number of funerals was anything from eighteen to twenty-four. All Catholics in the United Kingdom were entitled to a share in the spiritual benefits connected with the Church of Our Lady of the Holy Souls. Masses and other devotions were not limited to those buried in the local cemetery. The Church was considered a centre of prayer for all the faithful departed. The practice of reciting the De Profundis, Psalm 129, a liturgical prayer for the faithful departed, is said daily after all Masses. The words of the Psalm, now obliterated, were inscribed after 1907 in Gothic lettering beneath the clerestory windows. 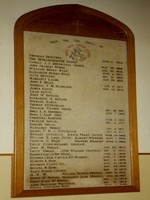 There are a number of marble tablets placed on the south wall of the Church. Donors of £5 could have a name carved on the tablet with date of death. The names of the living could also be inscribed and when they die they become entitled to the benefits of all Masses and prayers said even without notification of their death.
An extract from the Catholic Universe of 29th November 1918, signed: ’James the Least’, described the Church as follows: “… Bosworth Road is a mean and shabby thoroughfare. Externally the Shrine of Our Lady of the Holy Souls does not promise great things, though the west front and the belfry are admirable in their austerity. But, when once the ugly lobby is left behind, the interior is glorious.” 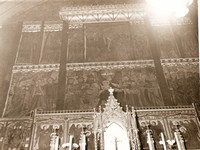 J.F. Bentley’s design was a version of early English Gothic and comprises a six bay nave with narrow aisles and a three bay chancel adjoining the sacristy and side Chapel.
Piers of Bath Stone separate the nave from the narrow processional aisles. Shafts rise from the piers to the clerestory height and support the timber roof. The clerestory consists of a two light window in each bay.

The wide and lofty nave of six bays is divided from the soaring lofty choir by a carved and painted rood screen. The reredos, with its twenty or thirty grandly painted panels is far more worth seeing than many of the things mentioned in the London Guide Books. Unfortunately many of these pictures were removed and have been destroyed.

The reredos was very striking. It reached from the back of the altar to the ceiling. All its panels were filled with religious subjects. They were an incentive to prayer and meditation. Most of these were painted by Father Baker. 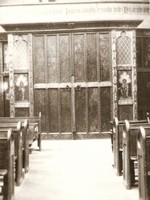 The southern elevation to Hazlewood Crescent consists of a plain brick aisle wall pierced by several pairs of cusped lancets (narrow windows). This projection, containing the organ loft, forms a transeptal block which is flush with the aisle wall, relieving and terminating the long line of clerestory windows.

At street level, the transeptal projection contains an entrance to the Church and sacristy, while its gable is decorated with stone bands, alternating with brick courses, a favourite device of Bentley.

There is no east window as the east end of the Church adjoins the presbytery. The west window is the only stained glass in the Church. “The carved and painted reredos, reaching from floor to ceiling was erected in 1889, in the Tudor style. It was designed by Father A.B. Baker and adorned the whole expanse of the east wall.”

“The Sanctuary is three bays deep, forming with the nave a continuous system of nine bays. The exquisite Sanctuary screen, in the 15th century style, surrounded by a rood screen, between the chancel and the nave was removed in 1959.”

The north wall has four arched recesses containing three confessionals and the Sacred Heart Altar. The wooden Altar designed by Bentley and painted by Stacey, together with the Bentley designed triptych – Annunciation, St Paul and St Thomas Aquinas – and the Pulpit have been replaced.

The exterior of the Church is of plain red brick with Bath stone dressings. The main roof, continuous over both nave and Sanctuary, was originally covered with green slates, and was re-roofed in 1980.

The western façade, in Bosworth Road, has an entrance opening into what was to be only a temporary entrance. The porch was designed by the Marquis de Saint Andre de Tournay d’Oisy, St John’s Wood and was blessed on 11th November 1921 in memory of Fathers J.J. Greene and A.S. Baker. Over the porch, the wall is pierced by triple lancets set between tall slender buttresses, and in the top stage between the two central buttresses the gable is pierced by three small lancets.

The organ loft with linen fold panelling raised on heavy timber piers is on the south side of the Sanctuary. The carver is recorded as Mr Houchin.

In the north and south side of the Sanctuary are richly glazed screens designed by Bentley. On the corner of Bosworth Road and Hazlewood Crescent is a bell turret crowned by a spirelet. 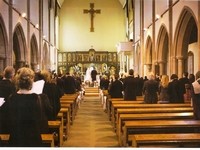