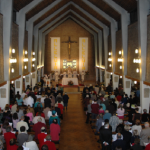 Although in the heart of London, Pimlico was built only relatively late. It was only in the mid-nineteenth century that the area was developed by Thomas Cubitt. The first Catholic church in Pimlico was in Claverton Street, a former Methodist chapel which was converted into a Catholic church and dedicated to the Holy Apostles in 1917. This was not a parish church but a chapel-of-ease served by the priests of Westminster Cathedral.

Being close to Victoria Station, Battersea Power Station and the bridges over the River Thames, Pimlico suffered heavy and sustained bombing during the Second World War. In the heaviest air raid of the War up to that point, the old Holy Apostles’ church was hit on the night of 16 April 1941. The roof was completely destroyed and the church was unusable. Amid the wreckage of the raid Fr. Hadfield jumped on his bicycle to take the Blessed Sacrament to Westminster Cathedral.

For over 16 years the Catholics of Pimlico were without a permanent church of their own. Mass was said in the Ambulance Station in Dolphin Square, houses in St. George’s Square and Warwick Square and then, from November 1945, in a pre-fab built on the site of the old church in Claverton Street. There are still many parishioners who were baptised or married in these makeshift churches.

With the end of the War and the need for new housing, the site of the old church was requisitioned as part of the project to build the Churchill Gardens Estate. For a time the future was uncertain. There were those who argued that Pimlico Catholics should go to Mass at the Cathedral. Fr. Hadfield was having none of it. He had not ministered to the local Catholics throughout the War to give up his position in peace time.

With so great a need for housing, the authorities refused to release land for a new church, so Fr. Hadfield cycled around the parish at night planting Miraculous Medals on bombsites. Finally, the site on Winchester and Cumberland Streets became available. Even then there were difficulties in obtaining building licences. Fr. Hadfield was the son of an architect and used his father’s Sheffield firm to build the new presbytery and church. That was done through the generosity and enormous sacrifice of the parishioners, but the new church was formally opened by Cardinal Godfrey on 1 December 1957.

Canon Hadfield, as he later became, held the extraordinary record of priestly ministry in the same area for two generations. Indeed, he remained parish priest of Pimlico until his death in 1982. There are still many strong memories of this forthright and traditional Yorkshireman who did so much to build up the parish. As he successor said, Canon Hadfield “was Pimlico.” That successor was Fr. Alastair Russell, a much-loved former Army chaplain, who was to be parish priest for the next twelve years. Since then, parish priests have come and gone. There has also been a succession of curates, sisters, deacons and seminarians who have given loyal service to the Catholics of Pimlico over the best part of a century.

In terms of building the church and running the parish organisations, so much has been done by the parishioners themselves. With a high proportion of Irish residents, Pimlico has always been a Catholic area. Parish life and devotions have reflected the times and today the rich traditions we have received are supplemented by a more cosmopolitan congregation. No one knows what the next century holds for the Catholics of Pimlico, but we look forward to witnessing in the locality to Our Risen Lord with faith, hope and charity.