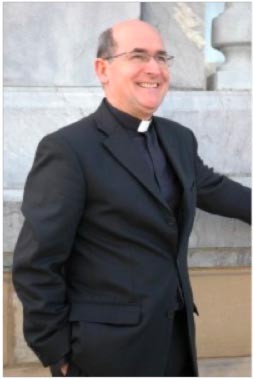 Father Pat was born in 1948 in Ratoath, Co Meath, Ireland. He is the eldest child of the late Jack and Lucy Browne.  He has four brothers and two sisters.

Father Pat studied for the Priesthood, at the Jesuit Apostolic School at Mungret College Limerick for one year.

He spent the next six years at All Hallows College Dublin and in 1974 was ordained for the Diocese of Westminster.  While he was at All Hallows he also studied Singing at the College of Music, Dublin, under Maura Tyrrell.

He was appointed Assistant Priest at St Edmund’s Parish, Edmonton and after three years he was transferred to Westminster Cathedral where he was Cathedral Chaplain with particular responsibility for Liturgy for the next eight years.

In 1985 he became Private Secretary to the late Cardinal Basil Hume. In 1990 he was appointed Parish Priest of Our Lady Help of Christians Parish, Kentish Town.  After eight and half years in that role he became Vocations Director and Promoter for the Diocese. Cardinal Cormac Murphy-O’Connor, Archbishop of  Westminster, has appointed Father Pat – our Parish Priest – a member of the Westminster Cathedral Chapter of Canons in October 2004.

In 2001 he was appointed Parish Priest of Holy Apostles, Pimlico. At the same time he became the Director of the Programme for the Permanent Diaconate. Father Pat was appointed a member of the Westminster Cathedral Chapter of Canons in October 2004.   In October 2010 he completed his term of office as Director for Deacons and was appointed by Archbishop Nichols as the first ever official Roman Catholic Duty Priest to Parliament since the Reformation.  He also continues in his role as parish priest of Holy Apostles, Pimlico.