The Parish of Sunbury-on-Thames is situated in the Upper Thames Deanery. It was founded in 1862. The church was built in 1869. It is built of Kentish Ragstone, with freestone dressings, in the style prevalent in England in the 13th Century.

Father Christian de Lisle was appointed parish priest in October 2020, taking over from Father Michael Tuck who had served the parish since 2006. Since his ordination in 2016 he has served as Assistant Priest at St Paul’s Church in Haringey and then in a duel role as Assistant Priest at The Immaculate Heart of Mary and St Dominic’s Church in Hackney, as well as chaplain of the Homerton Hospital. On arriving at St Ignatius he told the parish, “I do not know the western part of the diocese well but I am sure I can come to learn about quickly. Under the care of Our Blessed Lady and St Ignatius may my time in Sunbury be one filled with God’s grace and may we all grow in holiness together.”

The first Catholic church in Sunbury was set up by a schoolteacher George Seymour who moved to Sunbury around 1855. His house in Park Road (near the present Kempton Park) included a stable which he converted for use as a school during the week and a chapel on Sundays. A priest, Father Mooney, came from Heston to say Mass.

The Church on Green Street was formally opened on 23 May 1869, Trinity Sunday, by the Archbishop Manning, the Archbishop of Westminster. The parish priest, Father James Richardson Browne, had spearheaded a fundraising campaign to fund it and many local people contributed their labour free of charge to build the foundations.

The opening was reported widely, including in The Universe. The Archbishop was also full of congratulations for Father Browne and the congregation. He made particular mention of “the laboring men who of course had not much money to contribute”. He praised them for their contribution of labour, often working in the evening after they had completed a day’s work in support of their own families. The music at the service was a selection from Mozart’s Masses and executed by the choir of Beaumont College near Windsor, which at the time was the training college for Jesuit priests.

Soon after completion of the church, an adjacent piece of land was donated by a local Catholic landowner, Richard Westbrook Lamb of Rivermead House, for the building of the presbytery and school. Mr Broader of Hawk House was commissioned as the architect and the same builders and carpenters that had freely given their time for the building of the church also built the new school beside the church and a home for Father Browne and his successors as pastors. The school was formally opened in 1874.

The following extract from The Universe reporting the formal opening of the church succinctly describes the main architectural features of church as follows: “The Church is built of Kentish Ragstone, with freestone dressings in the style prevalent in England in the 13th Century. The plan comprises an apsidal chancel, a nave of four bays, sixty feet in length and twenty-four feet wide, and an aisle with circular columns and octagonal capitals supporting pointed arches. There is a window of four compartments with geometrical tracery over the principal entrance; The lateral windows of the nave are coupled lancet openings with quatrefoils in the arched heads. Those of the aisle are simple lancets, except the end window, which is of two Iights with trefoil over. An elegant chancel arch with sculptured capitals supports the gabled bell-turret. The roofs of the nave and aisle are of open timber work; the roof of the chancel is arched and boarded, stained, and tastefully decorated. The general lines of the Interior are graceful and the effect solemn, and the tones of the coloured glass in the lancet windows of the apse contribute to its beauty.”

As you enter St Ignatius church the first dramatic image that catches your eye is the magnificent modern depiction of the risen Christ in the central Sanctuary window over the tabernacle at the far end of the church.

The window, installed in 1996, with the theme of the Resurrection, clearly depicts several of the key beliefs taken from the church scripture on the theme of the Resurrection. The main focus is the risen Christ, with his crucifixion wounds and the cross in the background, depicting triumph over sin and death as well as extending a welcome to all who pray in our church. This deliberate triumphant Christ reminds us of his victory over death to bring eternal life to us all. (Romans 8: 2-4. 1 Corinthians 15. 45).

The window was installed to commemorate more than sixty years of devoted service that the Sisters of Charity of St. Paul gave to the Parish from the 1920s until they left in 1988. 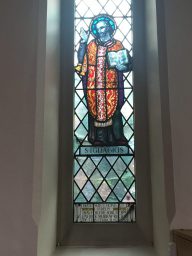 This window in the nave of the church features St Ignatius of Loyola. It was installed in memory of the service of Father Patrick Murray, who served as the parish priest for 29 years until his death on 14 February 1952 at the age of 77. He had been a priest for 49 years.

For the 150th Anniversary of the opening of the church in 2019 a book was published on the history of the parish of St Ignatius of Loyola in Sunbury. Copies of the book can be obtained from the parish for £5 plus any postage costs.

150 years of St Ignatius of Loyola

Parish celebrations of the anniversary were led by Cardinal Vincent, who celebrated Mass for the parish.