A Brief History of the parish and church

The Early Days
Our parish began in the early days of Letchworth Garden City.

The first parishioners were workers who had come to build roads and other amenities for the Garden City. Bernand Newdigate moved some staff from Arden Press out from London to Letchworth in 1907.  The first Mass was celebrated by Fr Charles Newdigate at his brother’s house in September 1907. Services were then held in one of the “sheds” near the railway line until the design and building of the parish church in 1907 – which now serves another but equally vital role in the parish community as it serves as the parish hall, aptly named “Fortescue Hall”. 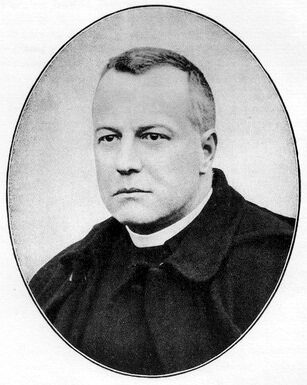 Being a unique and unusual parish, it was first served by an unusual parish priest, Fr Adrian Fortescue. He converted to Roman Catholicism in his late teens and was ordained a priest in 1898.  He was a renowned scholar, having achieved the rare triple doctorate in Divinity and Philosophy. Fr Fortescue travelled widely across Europe and the Middle East. He was an exceptional linguist – reputedly able to speak eleven languages! He had written many books on the history and development of liturgy in the Roman and Eastern Churches. His artistic ability enabled him to illustrate his books and he was skilled at calligraphy, having studied with Edward Johnston. He was also very gifted musically, composing many settings of church music and was proud of the choir of parishioners he had trained, with the help of his choirmaster and friend Thomas W Willson.

Fr Fortescue found a site in Pixmore Way for a temporary church and presbytery. The little church was dedicated to St Hugh of Lincoln and was formally opened and blessed on 6th September 1908.   Although more suited to the life of a scholar than a parish priest, Fr Fortescue was said to be diligent in serving his parish community.  He loved his little church and community and opted to be buried in the Garden City cemetery. He died in 1923 aged only 49 yrs. More information about Fr Fortescue is available to read here. 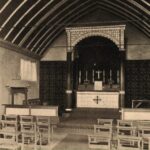 The interior design of the former St Hugh of Lincoln Church was heavily influenced by Fr Fortescue’s interest in the Byzantine Churches and also by his friendship with members of the Arts and Crafts Movement.  The building, designed by Sir Charles Spooner RIBA,  served the people well until 1963.

Our present Church was built in 1962, by local builders J. Willmott. 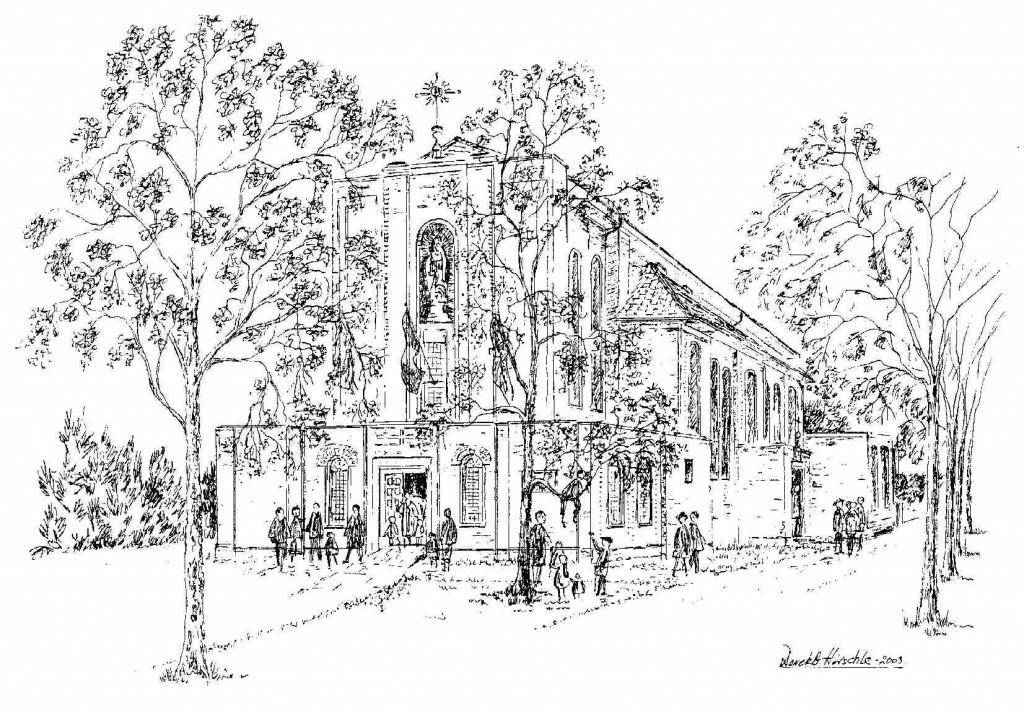 It was built to the original 1930s design with slight modifications.

Canon Hathway, the parish priest at this time, was thrilled with the new Church – a traditional style interpreted in a modern manner.

Thanks to a long-standing parishioner – Derek Hirschle – for the drawing of our church building.

1931 – 1933:  Fr Arthur Durein, a chaplain to Belgian refugees, was transferred from Baldock parish on Fr. Amery’s retirement. In1933 St Francis College was opened by the Sisters of Charity of Jesus and Mary from Belgium. Through their role in educating young people, the sisters became a key part of the parish community.

1933 – 1949: Fr J Lionel Dove, who had been MC at Westminster Cathedral, came to the parish. He immediately started working towards the building of a new larger church. A design was drawn up by Colonel John Dixon-Spain but building had to be postponed due to the outbreak of war.

1949 – 1969: Canon James Hathway, who had also served for many years at Westminster Cathedral, was parish priest when the present church was built in 1962. He also ensured that as many items as possible were saved and brought in from the original church including sacred items and artwork. The foundation stone of the new Church was laid by Cardinal William Godfrey on 7th April 1962. This was an era of renewal and modernisation within the Catholic Church, brought about by Pope John XXIII. Until this time, most services had been said in Latin, which provided continuity and universality, but in the 1960s they changed to English, to make them more accessible to the local church communities.

1969 – 1989: Fr Patrick Howard, accompanied by his pipe and very dry sense of humour, guided the church community through the 1970`s and 80`s assisted first by Fr Desmond Baker and then by Fr Frans Azzopardi.  Fr Howard had served mainly in Middlesex parishes for 15 years before coming to Letchworth.  He retired in 1989.It was during the 1980s that a pitched roof was added to the church, as the flat one had proved unsuitable for our British weather.

1989 – 2004: Fr Kevin Patrick Greene  had ministered in various parts of the world before coming to the Garden City. He joined the Columban Fathers and was ordained a Priest, in Ireland, in 1957. After studying at Marquette University in Milwaukee USA, he visited many parishes in the Eastern and Mid Western states of America, to appeal for the Columban Fathers’ work in the Far East. Fr Kevin’s next ministry was in South Korea, a totally different, mainly Buddhist culture. He found the Koreans to be wonderful people and learned to speak their language, becoming Director of Catholic charities for the Archdiocese of Kwangju and chancellor of the Archdiocese, while his bishop attended the Second Vatican Council. After his return, Fr. Kevin served in the Southwark and Westminster Dioceses and then in 1989 became our Parish Priest here in Letchworth.  Sadly, during his time with us he suffered a heart-attack, which left him in poor health, and this culminated in his death, still in post, whilst he was on holiday in Florida.

The parish is fortunate to have had regular visits from our Bishop for Hertfordshire, the late James O’Brien, who died in April 2007,  and on 30th June 1991 we were privileged to welcome the late Cardinal Basil Hume who officiated at Confirmation.  In 2012 Fr Seamus Murphy retired to Ireland.

Changes to the Church and Celebrations

Our parish community
During World War I many Belgian refugees came to the Garden City and joined our Church community. We were later joined by Irish and Italian families and after World War II by a large Polish community. The local Polish Community page can be accessed here.

Over the years our Church has benefited from the dedicated service of many of our parishioners, and during their tenures of office, our parish priests were willingly and ably assisted by members of our church community.  We are fortunate that this very generous service continues today, enabling our parish to grow and thrive. In recent times our parish has welcomed members from many parts of the world. We have also tried to reach out to the world community by supporting village and educational projects in Uganda and Eritrea.