Hounslow as a distinct parish was created in 1884. Prior to that it was served by a priest from the Sunbury parish.

Many years were to pass before Catholic worship was reinstated in the parish of Hounslow. To illustrate this, in 1706 it was reported that there were 3 Catholics in Isleworth, none in Hounslow and none in Cranford.

By 1862 a priest from Sunbury was visiting the Barracks in Hounslow to say Mass on Sundays. It is unlikely he was the first. Hounslow was part of the Sunbury parish which was called the “Sunbury and Hounslow Mission”. The Catholic Directory shows that in the years 1862-64 Rev Cyriacus Herdel lived at 6 Belgrave Terrace on the Bath Road and during the week Mass was said at this address.

Around 1885 through the generosity of the Beckwith sisters, F. Timothy O’Sullivan built a school – Chapel at 94 Bath Road.

During the week the building was used as a school and on Sundays it was turned into a place of worship.

The Hounslow Mission was created as a distinct parish in 1884. In 1885, through the generosity of Miss Madeline Bierwith, a school-chapel was built and became the centre of Catholic activity in the district. On a Sunday, the building served as a chapel, and during the week was converted with the minimum of effort into classrooms.

On August 24th, 1886 Cardinal Manning, Archbishop of Westminster, opened the Catholic Church of SS Michael and Martin. These saints were considered to be appropriate patrons for the garrison town of Hounslow. 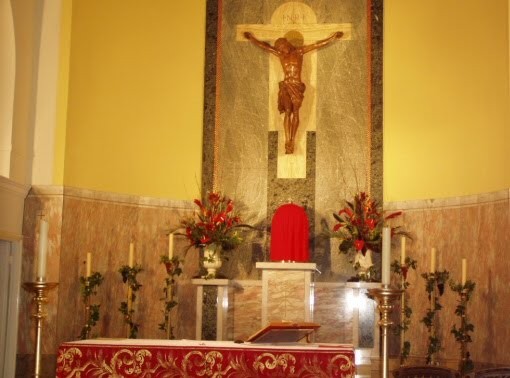 Patron Saints of the Church

Feast Day – 29 September
The Jews regarded Michael as the special protector of Israel, and in Christian usage he became the protector of the church.
He is referred to in Apocalypse (12:7 to 9:): “And there was war in heaven. Michael and his angels fought against the dragon… And the great dragon was cast out, that old serpent called the Devil and Satan, which deceiveth the whole world: he was cast out into the earth, and his angels were cast out with him.”
The powerful prayer below was instituted by Pope Leo XIII and used to be said after every Mass in the old days.
“Holy Michael the Archangel defend us in the day of battle; be our safeguard against the wickedness and snares of the devil.
May God rebuke him we humbly pray; and do thou O prince of the heavenly host, by the power of God, thrust down to hell Satan and all wicked spirits, who wander through the world seeking the ruin of souls.”
St. Michael’s feast day is celebrated on Michaelmas Day, September 29th along with that of Saints Gabriel and Raphael.

Feast Day – 11 November
Born to pagan parents; his father was a Roman military officer. Martin was raised in Pavia, Italy. He discovered Christianity, and became a catechumen in his early teens. Joined the Roman imperial army at age 15 and was eventually made a Bishop.
Trying to live his faith, he refused to let his servant to wait on him. Once, while on horseback in Gaul (modern France), he encountered a begger. Having nothing to give but the clothes on his back, he cut his heavy officer’s cloak in half, and gave it to the beggar. Later he had a vision of Christ wearing the cloak.
He travelled much and by his zeal, fervour and charity he brought about the conversion of the many throughout the length and breadth of France.
At present some 400 churches in France are dedicated to the memory of St Martin and whilst the French solemnly observe the signing of the Armistice on November 11th they also venerate the memory of their Patron Saint whose feast falls on the same day.