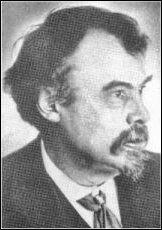 Mr. Taprell Holland had no hesitation in asking John Francis Bentley to design his church. Bentley was born in Doncaster in 1839 of Non-Conformist parents: his father wanted him to become a builder and at sixteen, in 1855, he was apprenticed to the building firm of Winslow & Holland. Mr. Richard Holland was kind to young Bentley and when he perceived his preference for designing rather than erecting buildings, particularly churches, he introduced him to Henry Clutton, an architect, who took him into his employment. Here he met William Burgess, A.R.A., who impressed upon him the importance of drawing to full size sculptures and figures in his designs, a habit he adhered to throughout his life.

From a photograph by his son Osmond in “Westminster Cathedral and Its Architect” by Winefride de L’Hopital. Hutchinson and Co.

In 1860, when Bentley was twenty-one, he refused the offer of a partnership with Clutton and decided to set up on his own. Much of his work was with churches, including the Jesuit Church in Farm Street and St. Francis of Assisi in Pottery Lane, Notting Hill. This may have been why he found himself more and more interested in Catholicism, leading him to being received into the church by Cardinal Wiseman in 1862. The ceremony was in the baptistry he had built for the lovely church dedicated to St Francis of Assisi. His devotion to St. Francis no doubt led him to take the name of Francis when he was baptised.

Was it only chance that brought the two converts together, architect and philanthropist builder, to build Holy Rood Church for Watford?

Bentley’s capacity for work was phenomenal. He began building Corpus Christi Church in Brixton in 1886 although it was not finished for lack of funds. In 1887/8 he built the Anglican church of St. Lukes, Chiddington, and by 1889 he had planned Holy Rood on which he continued to work for twelve years. By 1894 he was commissioned to build the new cathedral at Westminster.

Bentley was fifty when he was asked to build and furnish Holy Rood Church. There is every reason to believe that he was not restrained by considerations of expense and he was able to give it the benefit of all his experience at a time when he was at the peak of his powers. The result is one of the loveliest churches of the Victorian era in England, often spoken of as a miniature cathedral. Not only is it an outstanding example of his architectural genius, but its furnishings illustrate his exceptional talents in the design of woodwork, metalwork, paintings and stained glass, and his knowledge of the craftsman’s tasks in executing his designs.

Above the inner doorway at the Market Street entrance is a memorial tablet to the architect; it was erected by Mr. Taprell Holland and carved by the sculptor McCarthy as a tribute to the master for whom he had laboured for thirty years. Bentley’s head, modelled in low relief on a sunken medallion, is surrounded by a wreath. The enclosing frame of white stone is adorned with incised and lead-filled leafage. The inscription at the base reads:

*(There is a slight error in this date; the architect died on March 2nd).