The west wall of the Holy Ghost Chapel is pierced by a small window looking into the baptistry which is the next feature of our walk. It is worth stepping back into the western end of the nave to get a good look at the twin ogee arches which give entrance from the nave to the baptistry. Above the central carved column is set an angel carrying a shield emblazoned with the head of John the Baptist. 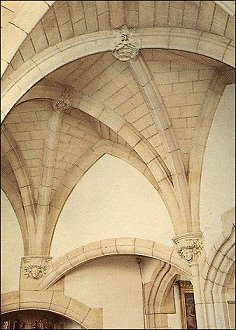 The ceiling above this is another painted barrel vault, and through the arches is a sight of the splendid central column, the squinches and the vault ribs which make the baptistry one of the most architecturally fascinating parts of the church. Walk through the beautiful arcade and look up at the tierceron rib vaults and the graceful central shaft. It is similar in design to a medieval chapter house, e.g., Lincoln or Wells. But at Lincoln and Wells the beauty and symmetry could be continued to floor level; not so at Holy Rood; look around and see what Bentley had to accommodate beneath that glorious canopy.

We start with a square room at the base of the tower. Into the room open the double-doors of the entrance from Percy Road and the twin arches of the entrance to the nave. In the north-west corner is a door to the staircase turret of the tower, in the west and north sides are deep-set windows and on the east side the glazed opening into the Holy Ghost Chapel. From this unpromising square with its asymmetrical portals and windows the architect, with great ingenuity, has produced a room of beauty and drama, a fitting background for the sacrament of baptism.

The key to the transformation is, of course, the squinch. Carried on elegant low moulded arches, the squinches form the upper part of the baptistry into an octagon from the corners of which ribs spring to join and fuse into the supporting column. The corbels from which the ribs rise are of great interest, being in each case carved with the head of a martyred priest in a foliate surround, The focus to all this, the pink marble font, is set on a low dais surrounded by blue and silver railings. Capping the font is a tall fretted oaken canopy. Behind the font, on the north wall, is an aumbry and on the east wall, rather the worse for wear, the emblem of Cardinal Vaughan and an inscription in Latin on the foundation stone of the tower, dated 7th May 1894. (The partially completed church was opened for worship in 1890. The tower, north aisle, Holy Ghost Chapel and west window were added between 1894 and 1900.)