Masses and all parish activities have been suspended due the COVID-19 pandemic till further notice.

After Fr. Keating’s death Fr. Dunlevy came to the parish. He was born in London in 1872 and educated at St. Edmund’s College, Ware. After his ordination he was priest for a time at the college, but he volunteered for service as an army chaplain in 1915 when he was already forty-three and not a young man. From May 1915 to March 1916 he was in the Ypres Salient, and from 1916/18 stationed at Etaples, so he shared fully with the troops the horrors and sufferings of the war and not for nothing was he mentioned in despatches. After his discharge from the army in 1919 he was appointed to Hanwell with the task of erecting a new church to Our Lady and St. Joseph. On coming to Watford he found himself faced with having to acquire a plot of land and eventually to build a church, this time for the people of Callowland, in the area now known as Harebreaks, North Watford. Not so long afterwards ill health, directly due to his war service, forced him to retire. 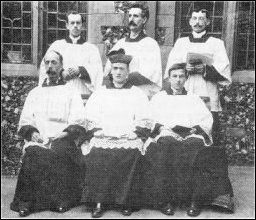 ​The duties of having to look after Holy Rood parish and the newly formed parish of St. Helen at Harebreaks now fell upon the shoulders of Fr. Andrew Arthur, but he in turn was ordered by his doctor to take three months rest – The Cardinal thereupon appointed Canon Jackman to the parish with the assistance of Fr. James O’Connor.

Born in Shoreham in 1878. Arthur Jackman at an early age wanted to enter St. John’s Seminary at Wonersh, and in 1893, at the age of fifteen, was accepted and spent six years there before going to Rome. In 1902 he returned to St. John’s where he was ordained on 17th July by Bishop Bourne. Not long afterwards he became secretary to the by then Cardinal Bourne, an office he held for many years and during which he gained a wide insight into the administration of the church and the Westminster Diocese. In 1910 he was appointed Privy Chamberlain to the Pope. The Order of St Sava was conferred upon him and he was made a Knight Commander of the Holy Sepulchre, and a Commander of the Order of the Crown (Belgium). He was appointed a Domestic Prelate to the Holy Father.

Mgr. Canon Jackman served on the Cardinal’s Committee for decorating Westminster Cathedral, so he would have gained a detailed knowledge and appreciation of Bentley’s work. His appointment to Watford parish in 1927 was therefore all the more gratifying to him for he came to love and be proud of the beautiful church of the Holy Rood now in his care. At forty-nine Mgr. Canon Jackman was a mature priest with business ability and drive: he was a cheerful soul with a lively sense of humour.

In February 1928 he launched a monthly printed magazine entitled ‘The Holy Rood Chronicle’. It contained interesting articles, not all of which were religious; it carried snippets of parochial information and included advertisements subscribed by local firms and shops. The Chronicle continued at least up to No. 80, October 1934, yet copies are extremely rare and hard to find. The Chronicle was followed by Holy Roodlets, a monthly leaflet no doubt the result of the restrictions caused by the outbreak of the second World War.

An outstanding event in Canon Jackman’s time was the ordination in Holy Rood church of a parishioner. Francis Hewitt lived with his parents in Harwoods Road and became an altar server at ten, probably for Fr. Keating. He was rejected by the army in the first World War and spent the years in a munitions factory. After the war, convinced of his vocation, he went to St. Edmund’s College, Ware, but he had to leave at the end of the year because he seemed incapable of learning Latin. He came back to work in Watford for a time in Kinghams, the High Street grocer, then he went to France where a French priest succeeded in teaching him Latin and sent him to the seminary. He returned to Watford where Canon Jackman arranged for him to be ordained in the church of his boyhood in 1929. Other parishioners in Canon Jackman’s time who became priests were:

Canon Jackman was responsible for the formation in 1927 of the Watford Section of the Catholic Women’s League (C.W.L.) and its inauguration on 6th May 1928. In response to an appeal by him in the September issue of Holy Rood Chronicle for a blower or, as he put it, an assistant organist, the C.W.L. raised the entire sum of £50 needed to provide an electric blower for the organ which until then had relied on a volunteer to pump it by hand. The C.W.L. is today one of the most active organisations in the parish.

Before the altar in St. John’s Chapel had been built, Canon Jackman used to arrange for a lovely Crib to be built at Christmas time by professional people. It was outstanding, even including dummy parrots, birds and animals. Many people, including non-Catholics, would visit the church especially to see the Crib. There is a story that he even put his cat, of which he was very fond, in the Crib amongst the animals. Recalling his great sense of humour this seems possible. On one occasion, speaking at an Armistice Day Sunday evening meeting in Watford he said “I left Rome last week … (pause) … the city not the Church!”

When Canon Jackman became Rural Dean he brought to the office the same diligence that Fr. Keating before had shown, and he became a very popular figure in the parishes comprising the Deanery. Canon Jackman also served on the District Nursing Committee and he was diligent in visiting members of the parish who were in hospital. Later he became a patient himself in the Peace Memorial Hospital where he was taken suffering from thrombosis. He had been there a week or two and it was hoped he was making a good recovery when he had a relapse and died on 21st May 1945, aged sixty-seven. A solemn Requiem Mass in the presence of Cardinal Griffin was attended by a large number of Watford people. Afterwards he was buried in Vicarage Road cemetery. The Lady Altar in Holy Rood church is dedicated to his memory.

World War Two broke out in Canon Jackman’s time in Watford. Fortunately Holy Rood church, schools and convent escaped damage from the air raids but, during one raid in which many incendiary bombs were dropped, one fell through the kitchen roof of the presbytery and Fr. Oddie, the curate, put it out, as well as one which fell in the playground. During daytime alarms some of the schoolchildren were shepherded into the church crypt, whilst others sheltered in the narrow passage behind the high altar of the church. The church tower was used as an observation post by the Firewatch Controller, and the convent was taken over by the army (the Third Regiment of Artillery).

Midnight Mass was suspended until Christmas 1944 when the church was packed with civilians, service personnel and U.S. airmen, so much so that Fr. Oddie allowed members of the crowded congregation in the gallery above the altar.

Fr. Philip Oddie was born in 1889 and ordained in 1911 He served as an army chaplain in the 1914-18 war and was awarded the Military Cross in the 1917 New Year’s Honours List. Whilst at Brompton Oratory he became the choirmaster, so it is not surprising that when he came to Watford as curate he formed a choir from the boys of the parish. He was a great favourite with the children and those who recollect him say that he had as many as a hundred children at his catechism classes. He introduced ghost stories into his teaching and handed out little cartoons he had drawn. He also had an elaborate model railway which attracted the children, and articles by him about railways were published in issues of the Holy Rood Chronicle. Fr. Oddie left Watford in 1944 to become chaplain to the Port of London Authority. He died of cancer in 1947.