The two principle public entrances to Holy Rood Church are at the western end of the building. The one commonly in use gives access to the north-western end of the nave through the baptistry at the base of the tower. The planned main entrance, now rarely used because it faces the busy Market Street, opens into the south-west corner of the nave and immediately provides the visitor with a splendid general view of the interior, looking diagonally across the nave to the pulpit, rood loft, chancel and altar, and directly across to the baptistry and Holy Ghost Chapel.

It is a delightful aspect, a joyful and harmonious blend of colour, light and architectural rhythm. The style is late 14th century Gothic, or early Perpendicular, but used with a confidence and freedom which captures a medieval exuberance and vigour, totally avoiding the dull rigidity of some Victorian Gothic. 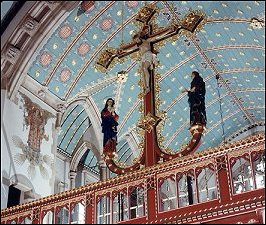 ​The rood loft and great crucifix with attendant figures of Our Lady and St. John claim attention and underline the dedication of the church. The rood group is balanced by the beauty and colour of the east window and the altar which, since there is no rood screen, is clearly visible from the nave.

The church is not large, but it is beautifully proportioned. The total interior length is 98ft, the chancel taking up about one third of the distance. The nave, including nave aisles, is 65ft wide, and the internal height from the nave floor to the crown of the barrel vault is 35.5ft.