PLEASE REFER TO THE CURRENT NEWSLETTER FOR LIVESTREAMED MASS TIMES

Once Bentley was commissioned Mr. Taprell Holland formally conveyed the land for the new church, presbytery and school to Cardinal Manning and the Diocesan Trustees. Bentley produced his plan for the church in January 1889 and a tender for building it was accepted from T. Turner Limited. An early photograph shows that no less than forty craftsmen were employed on the building.

The foundation stone was to have been laid by the Cardinal on 24th June 1889, The Feast of the Birth of St. John the Baptist, but a few days earlier he was taken ill. The ceremony eventually took place on 29th August, the Feast of the Beheading of the Saint, with Canon Keans standing in for the Cardinal.

It was decided to complete first the sanctuary, nave, transepts and south aisle, so that the church could be opened for worship as soon as possible, and the date chosen was 16th September 1890, the nearest convenient day to 14th September, which was a Sunday. When the church was opened by the Rt. Rev. William Weathers. Bishop of Amyela, on behalf of the Cardinal who was ill again, permission was given for the celebration of the Feast of the Exaltation of the Cross to be transferred for the occasion from 14th September. 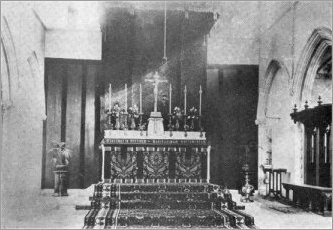 ​The church was not in the glorious finished condition it is today. It had a temporary High Altar with a canopy draped in rich silk. Above the altar the great east window was not yet fitted with stained glass illustrating our Lord’s Passion. Indeed, none of the stained glass which now enriches the church was installed at the time it was opened for worship.

Whilst every effort was being made to have the church ready for use by the opening day, it is said that Bentley deliberately left space for the parishioners to provide the two side altars, so that they would feel that they had taken some part in the building of their church. The Lady Altar was eventually built in memory of Canon Jackman, and the altar in the chapel of St. John the Evangelist as a memorial to those who fell in the two World Wars of 1914-18 and 1939-45.

A description of the church given by Bentley the architect, to the local paper at the time of the opening shows what he had kept in mind when designing the church:

“The church when completed will fairly represent an old English church of the Hertfordshire district prior to the Reformation; though it is in no way a copy of any particular church. He believed it was the largest example of a Rood erected in this country since Edward VI ordered that all such should he destroyed and burnt.”

It is interesting to note that amongst the many priests present at the opening was Fr. George Bampfield who, as a young priest over twenty-five years earlier had founded the Watford Mission. The occasion must have been a great reward to him. Little is known of the ceremony which started at 11.15 in the morning and is described as a Pontifical High Mass. The Very Rev. Canon Keans preached a long but very interesting sermon describing the finding of the true Cross by St. Helen, a native of Britain and mother of Constantine and its eventual restoration to Jerusalem. This sermon is reproduced as an Appendix I. After the service luncheon was served in a tent in the grounds adjoining the church.

Fr. Ryan became the first parish priest of Holy Rood when it was opened; presumably because England was short of Catholic priests, Fr. Ryan was sent on loan to the Westminster Diocese long before the Irish Immigrant Chaplaincy Scheme was inaugurated, but in 1893 he was recalled to Ireland by his bishop. After his recall Fr. Thomas Roche was appointed to the parish, but it would seem that he was only to give a few months’ service to his task, for a Fr. George Cox undertook the priestly duties until 1895 when Fr. Thomas Regan was appointed. Fr. Roche died in 1896 aged twenty-nine. He is remembered by a tablet outside the Holy Ghost Chapel.

Bentley was now able to build the tower, baptistry, chapel of the Holy Ghost, which was to be the chantry of the benefactor, and the north aisle, shown in his original plan. The foundation stone for the tower was laid on 7th May, 1894, by Cardinal Vaughan. The date chosen was the nearest convenient day to 3rd May, in those days kept as the Feast of the Finding of the True Cross. A plaque commemorating the laying of the foundation stone is in the baptistry at the foot of the tower.

In the years that followed Bentley worked on designing and completing the church furnishings. He designed the six candlesticks and the cross over the tabernacle in 1893. Unfortunately four of the candlesticks were stolen in later years. The remaining two are now on display in the Watford Museum. The pulpit followed in the same year and the two canopied statues in 1893/4. The temporary High Altar was replaced by the present altar and its wonderful tabernacle in 1899. Unfortunately the large winged pelican which surmounted the tabernacle was stolen much later, about 1978, and the present pelican is smaller and less imposing and artistically satisfying, but it has replaced the loss. Electric lighting replaced the original gas in 1899, using the gilded bronze pendants designed by the architect. At the same time work was in progress on the tower, baptistry, Holy Ghost Chapel and the north aisle, which were completed in 1900.