The harsh penal laws and the denial of normal social, business and political life to Catholics in the 17th and 18th centuries made it difficult for them to keep their faith. However in the 19th century political union with Ireland brought strong pressure on Parliament to repeal the Anti-Catholic Laws and the Catholic Emancipation Act was passed in 1829. The Act released pent-up pressures of the church. The Victorian era was a time of deep religious feeling and the Oxford Movement created a great impression. Prominent Anglicans like Newman and Manning became converts to Catholicism. The English Hierarchy was re-established by Rome and missionary priests began to bring Catholics back to the fold in towns and villages throughout the country. 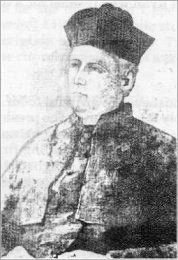 ​
The re-establishment of the Catholic church in Watford, and indeed in North Hertfordshire, owes much to the tremendous zeal and energy of a young priest, Fr. George Bampfield. Whilst a young Anglican clergyman he sought admission to, and as received into the Catholic Church at Brompton Oratory in 1856. He went to St. Edmund’s College, Ware, to study for the priesthood and was ordained in 1857. Then he spent a short time at a college in Rome and fifteen months at Stratford as assistant priest. Cardinal Wiseman, however, wanted this learned Oxford graduate to be Prefect of Studies at St. Edmund’s, but Fr. Bampfield asked if he might in addition be permitted to undertake missionary work and he was given permission to do so.

From “The Albanian” Vol. 2. No. 1. Magazine of the Finchley Grammar School

Fr. Bampfield immediately opened a mission at Waltham Cross, which he at first served from St. Edmund’s until he found a house in Waltham Cross which became his headquarters. In the same year he set about reviving a mission in Barnet which had been started in 1850, but which had declined. He also set out to establish Mass Centres in other parts of Hertfordshire, travelling as far as Enfield, St Albans and Watford. To appreciate all that this involved it is interesting to read that on Sundays, in all weathers, he would ride on horseback and sometimes walk part of the way from Waltham to Barnet, a distance often miles, to say Mass and preach, returning to Waltham Cross to say Mass and preach again before breakfast. He would then repeat the journeys in the afternoon to give Benediction at Barnet and again in the evening at Waltham Cross, altogether travelling a distance of forty miles in a day. Fr. Bampfield on one occasion was so wet from his journey that water dripped from him as he stood at the altar. It is said that he kept this schedule for a year and, when help came in the shape of a curate, he simply extended his travels to bring Mass to other parts of Hertfordshire.

Fr. Bampfield came to Watford in 1861 and on two subsequent occasions looking for a suitable place in which to say Mass, but without success. In the yards and courts off the High Street he found only four or five Catholic families and they were very poor, living in miserable habitations quite unsuitable for a Mass Centre. In 1863, after inserting a notice in the papers for Catholics to come forward and make themselves known to him, he met a Mr. Conlan who had recently moved to Watford. Through him he was able to hire a room in Carey Place, which joined the High Street near to number 137 which no longer exists. On Sunday, 17th October of that year, Mass was said at 8.30am and on subsequent Sunday mornings. About sixty people attended, including a number of seasonal agricultural workers from Ireland.

However what Fr. Bampfield really wanted was a site on which he could build a small church for about £300. In 1863 he discovered that building plots were being offered for sale just a short distance the Bushey side of the railway arches. He bought one and built a wooden hut with a corrugated iron roof in Upper Paddock Road. He dedicated this chapel after the Sacred Heart of Jesus and St. John the Evangelist and Mass continued there until 1959 when the Bushey and Oxhey church of that name was opened in London Road. The chapel no longer exists and on the site there are now two maisonettes.

Meanwhile Fr. Bampfield, concerned that Catholic children living in country districts remote from a mission were in danger of lapsing, opened a boarding school for poor boys and girls in Barnet where he was now living. With the few priests helping him they founded the Institute of St. Andrew, one of its objects being to provide missions and chapels in country areas. No doubt because of the rapid increase in the number of Catholics in fast growing Watford, Fr. Bampfield in 1882 again sought a suitable site nearer the centre of the town and found a place in Water Lane near the High Street where he built a chapel. This centre, commenced in 1883, continued to be used until Holy Rood church was opened in 1890.

The Fathers of the Institute of St. Andrew appointed Fr. Samuel Swanston to be the resident priest but, unfortunately, he became seriously ill and died shortly after appointment in 1887.

On the wall at the west end of Holy Rood Church is a small memorial plate inscribed:

The Institute then informed the Cardinal that they could no longer be responsible for the mission, and when informed of this decision he appointed Fr. Henry Hardy of Harrow to have joint responsibility for the Harrow and Watford missions. Fr. Hardy continued to reside in Harrow and Fr. James Doyle, as assistant priest, is reported to have taken up residence in Homer Place, Watford. This was most probably one of the many alleys or courtyards off the High Street, but efforts to trace it from early records and maps have been unsuccessful. When Fr. Hardy died soon afterwards in 1887, he was succeeded by Fr. Michael Ryan who resided for a time at 28 Gladstone Road, near Water Lane.