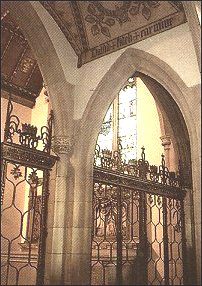 View of Lady Chapel from the Chancel

Like St. John’s Chapel, the Lady Chapel is screened from the ambulatory by a gilded ironwork grille, this one in its beauty and delicacy is a particularly fine example of the blacksmith’s craft. Crowned monograms of Mary alternate with fleur de lys above the cornice which is pierced with the words “Pulchra es amica mea suavis et decora sicut Jerusalem” (“You are beautiful my love, sweet and comely as Jerusalem” Another grille on the north side of the chapel divides it from the rather small and dark space which Bentley called the “Choir”.

The modern and dignified altar by T.J.Denny is backed by a white and blue painted wooden reredos which has two carved panels, one on either side of the central statue of the Virgin and Child. The left panel represents the Annunciation; on the right is the Coronation of Our Lady. The window is of three lights and traceried like that in St. John’s Chapel. In the centre light Our Lady sits enthroned with the Christ Child on her knee. Above, two cherubs hold a golden crown, while below an angel robed in scarlet carries a scroll. The side lights are each divided into two and carry representation of Old Testament characters. On the left Moses and Jacob, on the right David and Gideon.

The ceiling is a four canted vault of wood painted a light golden brown decorated with golden lilies and crowned monograms of Mary Queen of Heaven (MR.). The tiled floor and the gilded iron altar rails incorporate fleur de lys. Just outside, by the north side of the chancel arch, is the shrine of the Blessed Virgin. The shrine, like that of the Sacred Heart, is of carved and gilded Kauri pine elevated on a marble pedestal. In a description of Holy Rood written in 1919* the statue is listed as designed by Bentley and carved in alabaster, a companion piece to the statue of the Sacred Heart. The present statue is not of alabaster and does not appear to be a Bentley design, so something of a mystery surrounds it since there is no record of any change being made. The present statue fits happily into the shrine, but it would be nice to know what happened to the Bentley original.

This then is the church that Stephen Taprell Holland gave and John Francis Bentley built. Holland lies buried at Aldenham, Bentley at Mortlake, but of both men it might be said in Holy Rood, as it is said of Wren at St. Paul’s “If you seek my memorial look around you”. As you leave take a few minutes to walk along Percy Road and look back at the tower, it is the only place from which it can clearly be seen. Look well at what must surely be one of the most beautiful towers in the land.