(This photograph was taken before the extensive restoration work to the Rood and Sanctuary.)

The nave is plain but elegant with clerestory windows above the arcades which continue across the transepts. The two-storey arches of the transept bays, and the giant order columns on which they are centred, form an architectural introduction to the two-storied sumptuousness of the chancel, and in a most ingenious way link the nave with rood-loft and chancel arch. The extrados, or upper course of the arch moulding, is looped across the springing of the arches to form a continuous line of moulding from the west wall to the chancel arch. The loops are an unusual and very distinctive feature in themselves, but they also enclose fine corbel heads that decorate shafts which rise from column base to cornice where they are completed by finely carved capping stones, each with a head in a foliate surround.

The western end of the church consists of a plain wall enclosing a huge window of twelve lights, details of which are given in the next chapter.

A walk round the Nave

Above the south-west porch is a memorial to John Francis Bentley whose head, in profile, is modelled in relief within a concave medallion which is set in a white stone frame. The sculptor, McCarthy, had known and worked for Bentley over 30 years. 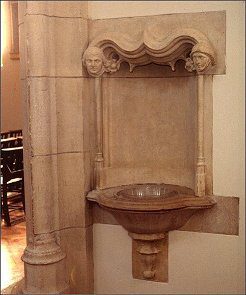 Immediately to the right of the door is a delightful holy-water stoup, an elegant basin set in a semi-circular niche with a canopy in which the moulding is terminated by two small stone heads, one male and the other female. Further to the right where a door from the same porch opens into the south aisle is a similar stoup, equally delightful but with different carving and heads.

Fixed to the south aisle wall are the 9th to the 14th Stations of the Cross. These are not Bentley’s work although the wooden frames were adapted from a Bentley design. The stations, painted on copper. are the work of N. H. J. Westlake who was a friend and colleague of Bentley in his early days. They were painted some years after Bentley’s death.

Two four-light windows on the south wall are delicately tinted to produce a mellow golden light. Represented in the windows are notable characters from the Old Testament, Jacob, Zacharias, Isaiah, Jeremiah, Moses, David, Osee and Malachias. These beautiful windows. as with all the windows in the church other than the west window, were designed by Bentley. George Daniels drew the cartoons and the glass was painted by John Sears. 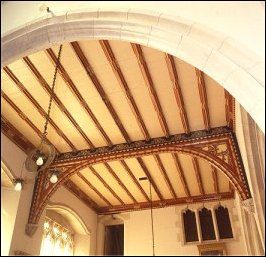 ​The south aisle has a flat ceiling supported midway by a moulded beam carried on stone corbel heads and resting at its eastern end against the wall above a transverse double arch which gives entry to the transept. Both ceiling and supporting beam are richly painted. On the other side of the transept is the chancel arch of the Chapel of St. John, above is the blue painted high vault of the transept, to the left the two-storey arcades of the nave and to the right a splendid six-light traceried window.

Painted Ceiling and Beams over the South Aisle

The window in the south transept is set high with its base at the level of the aisle ceiling and the apex of its arch very near the crown of the vault. The 14th century style of tracery provides six lights with a strong central mullion giving the effect of two sets of three lights, the central light in each instance taking advantage of the sub-arch to rise higher than its two outer neighbours, The subject is the life of St. John the Baptist The colouring is delightful with a beautiful blue showing through the decorative grisaille of the lower parts of the shorter lights. The lower part of the long central lights show the two great prophets, who like John the Baptist were “voices crying in the wilderness”, Isaiah with the saw with which he was martyred and Elijah with the raven which fed him while hiding in Cherith brook. The upper parts of all the lights are concerned with events in St. John’s life: the vision of Zachary, the Visitation, the naming of John, John’s visit to Jesus, the baptism of Jesus Christ and John’s head being presented to Salome.

The wall space below the window is quite plain and does not project beyond the aisle wall. Transepts contained within the outer walls of the nave feature in many of the early Gothic churches of France and Spain but are less common in the United Kingdom.

Moving across to the north side it will be seen that the transept there is larger than that on the south side: this is because Holy Rood is extended on the north by the choir to the left of the Lady Chapel, thus the north transept has a width of two bays, one more than on the south side. Again, the dominating feature is the window, and this stretches tall and slim virtually from floor to ceiling. At the lower level is a plain glass leaded light set into what would be called a sedilia if it were on the south side of the chancel, a stone seat in a canopied alcove. Above the moulding of the canopy rise three beautiful transomed lights depicting through the Tree of Jesse the ancestry of Christ and culminating at the top with the Holy Family in the carpenter’s shop at Nazareth and the child Jesus discovered by his parents in the Temple. To the right of the window note the very elegant doorway which gives access to the sacristies and to the presbytery.