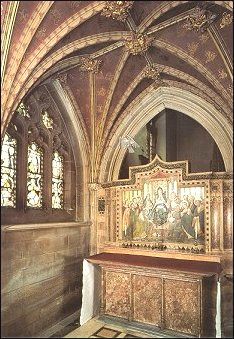 ​The Holy Ghost Chapel, or chantry chapel of the founder, Stephen Taprell Holland, occupies the space between the outer western bay of the north transept and the baptistry. The chapel opens into the north aisle with a triple arcade, two arches of which are enclosed by a gilded grille; the third is blind but pierced by an ogee arched doorway closed by a gilded iron-worked gate. Between the arcades of the chapel and the wall of the nave is an unusual ceiling consisting of quadripartite vaulting from the arcade piers linking halfway with a semi-barrel vault dropped from the nave wall, all richly painted. 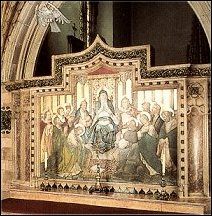 ​From vaulted ceiling to marble floor the chapel glows with colour and the sheen of the finest quality stone. A Pentecostal theme inspires the painting of the vaulted ceiling, deep red with golden tongues of fire. The multiple ribs and panelling of the vaults derive from the period immediately before the vault was developed into its final form, the fan vault. High grade coloured marbles make the altar, reredos and gradine, a thing of great beauty into which is set a fine coloured tile panel depicting the descent of the Holy Ghost in the form of tongues of fire upon Our Lady and the Apostles in the upper room. Above the altar is suspended a silver dove representing the Holy Spirit. 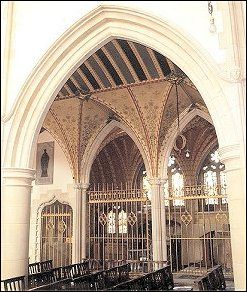 The north wall of the chapel contains three windows and an arched recess meant to contain the tomb and monument of the founder. A small two-light window to the left of the recess shows the founder’s armorial device and an angel carrying a medallion depicting Holy Rood, his gift. The other two windows also have an angelic theme and are equally exquisitely designed and painted. Golden-haired, white robed archangels occupy the upper part of each of the two triple lights while below an orchestra of angels play their musical instruments. The tracery contains red, blue, green and gold seraphim.