This page has been started to commemorate the Parishioners of St Joseph and the English Martyrs who lost their lives in WW1 and who we remember each year on Remembrance Sunday as part of our ‘ There but not there’ project.

We extend our grateful thanks to their families who have kindly shared personal stories, memories and photographs of their loved ones so that we can learn more about the brave Men ‘behind the silhouettes’. We shall remember them…. 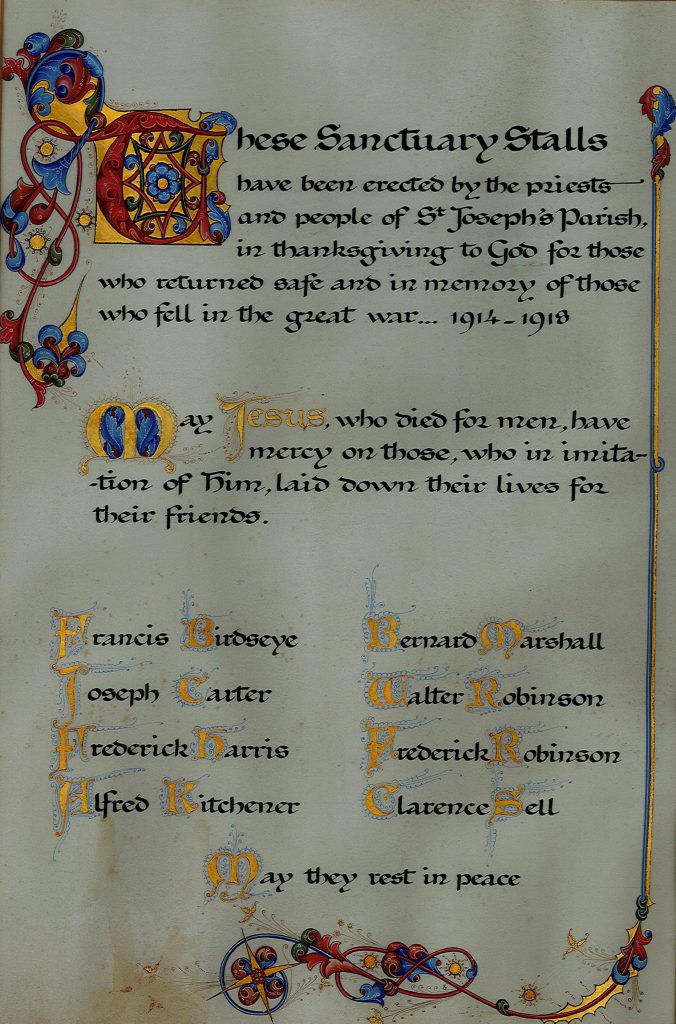 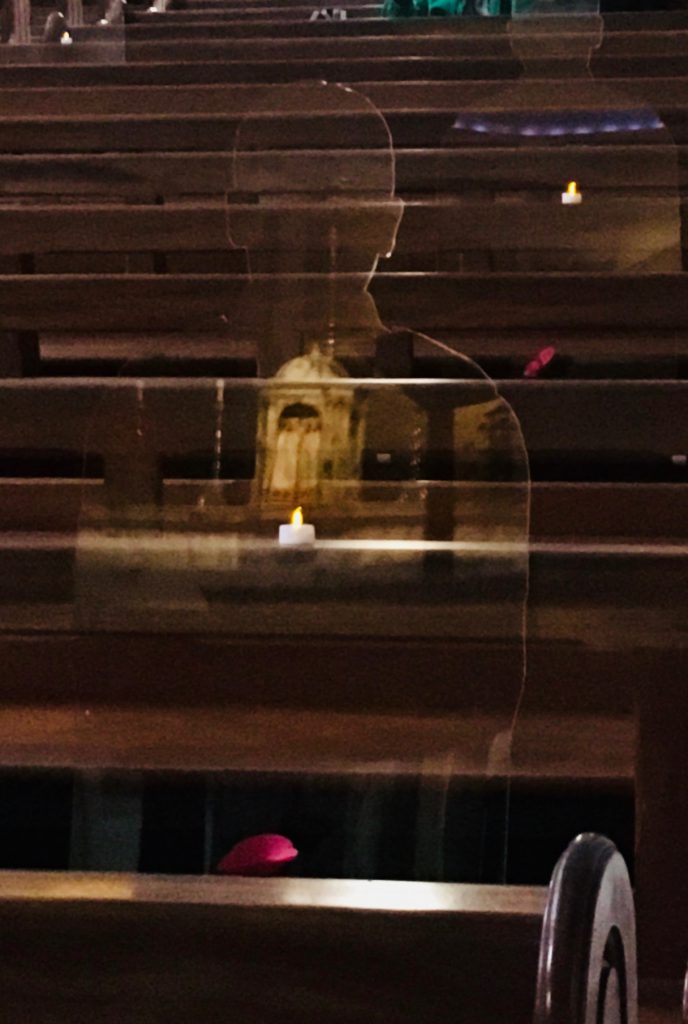 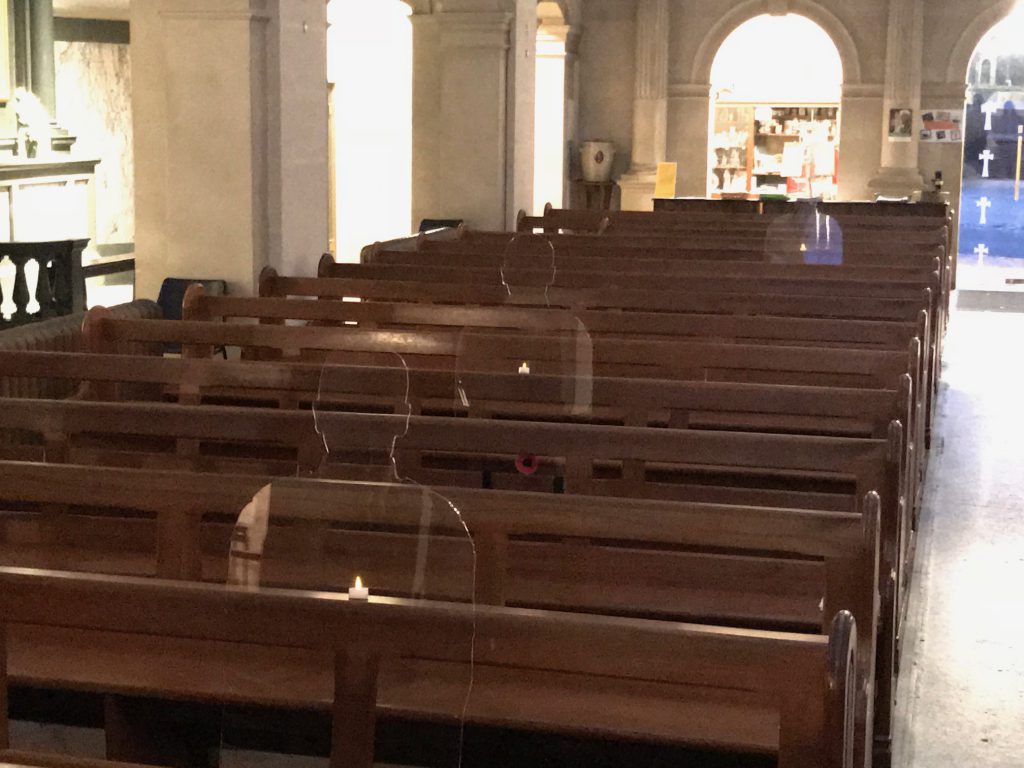 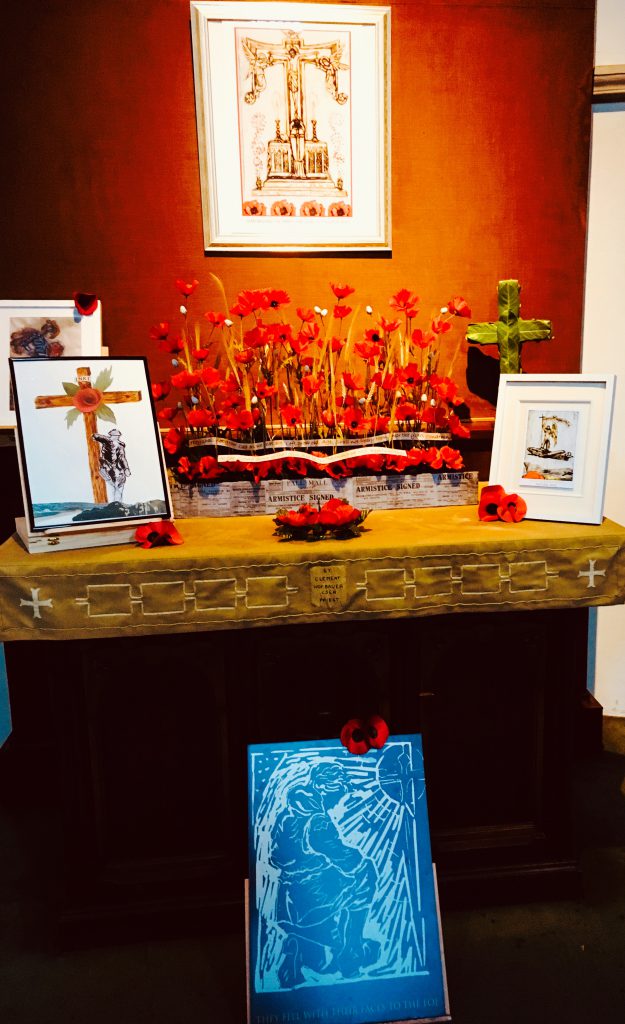 Discovering more about Francis Birdseye in the way that we did, was either one of pure chance,coincidence or divine intervention and caused great excitement in the Parish Office! It is a story which we have been granted permission to share with you.

On Sunday 19th April 2020 during the Covid-19 lockdown, when all of our Churches were closed and Mass was celebrated via our Live stream service , a gentleman called Mr Martin Birdseye, who does not live in our parish, just happened to join our livestream and then wrote the below email of thanks to Fr Peter Harris .

Dear Father Peter,
Thank you for the Mass and for your thoughtful compassionate homily.
Martin Birdseye

Following receipt of this short email and noting the rather unusual but familiar surname, we replied back to Mr Birdseye including the now infamous sentence…

‘I hope that you don’t mind me asking but, as your surname is quite unusual, I wondered if you happened to be a relation to ‘Francis Birdseye’ from our Parish, who we remember each year, as a young man who lost his life in WW1 ?’

Thank you. That is really interesting. I do have a family connection to Bishops Stortford. I suppose that’s why I picked it out when I looked up on the diocesan website to see where to ‘go to Mass’ yesterday.
My father, Laurence Birdseye, came from Bishops Stortford and sometimes we went there to visit our aunties. I never knew his parents, but I know his mother died in 1918 (I’ve assumed it was from the flu epidemic.) and his father died around 1944, maybe before I was born. I think that Francis Birdseye must have been my father’s uncle.
Francis was my father’s middle name so maybe it’s not surprising that I had a great uncle called Francis. That he is commemorated in that beautiful scroll seems truly wonderful to me. I shall copy this to my siblings who may well know more of the family background.
Thank you again, and Father Peter

We then waited for a response….. and were amazed at the amount of information which we then gratefully received from the Birdseye family.

Thank you for your interest in Francis James Birdseye. Yes, he was my Great Uncle, as confirmed in the message below from my Canadian brother-in-law Jim Ungrin. Some years ago Jim produced a marvellous 200 year history of the family which includes Francis James Birdseye. The relevant chapter is attached to this email. I also attach copies of other interesting things from Jim and my brother Greg:
– a memorial prayer card, possibly produced at your church,
– a photo of Francis in his uniform,
– a letter from his commanding officer (not complete),
– a family tree of Francis James (made yesterday by my sister Rose).
On the family tree you will also see the siblings of Francis: Thomas (my grandfather) and Mary, who were part of your parish for many years. My dad once told me he could remember his dad (Thomas) playing the church organ, very loudly. I wonder if that was also in your church. The last of the Stortford Birdseye’s was my Auntie Margaret (she died in 1983). Someone there might remember her.

From all this you can see that you have sparked a renewed family interest in my family, Thank you. 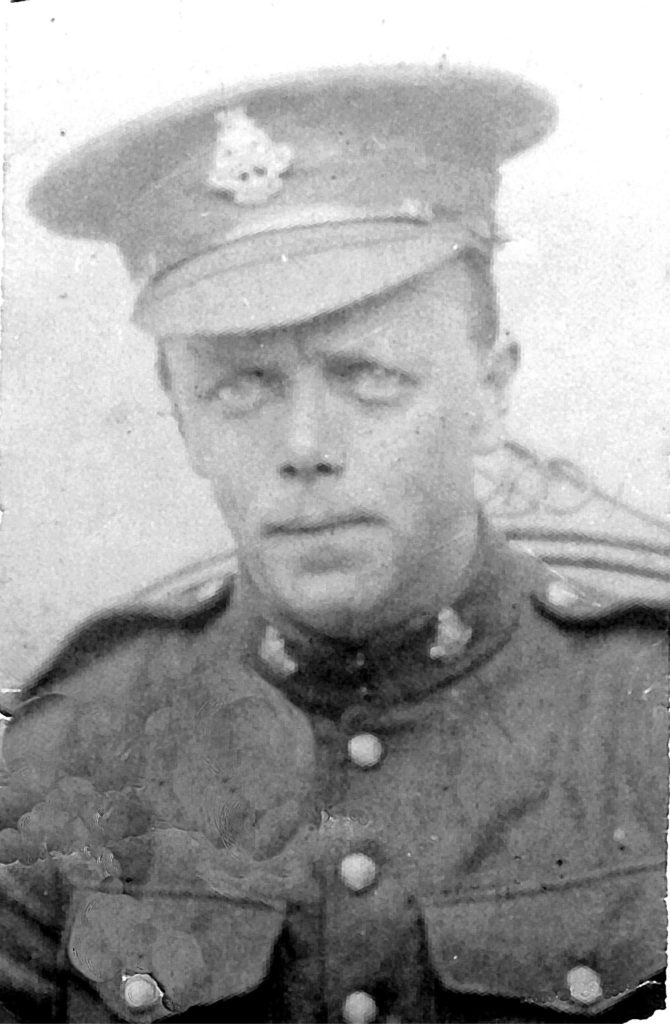 Francis James Birdseye (born 1882) was the middle of the three children. Details of his early life are scanty but sometime around 1905 he moved to Montreal in Canada. Recollections from his family are that he was a perfumer by profession. In Montreal he met Frances Fanning (born 1883) who had come to Canada from Enniscorthy, Ireland and they were married 1909. A son, Francis (Sonny) Birdseye was born in 1910. He was followed by three more children all of whom died as infants. They were: James (b 1912), Nelly (born 1913) and Patrick (born 1914).

With the outbreak of WWI the family decided to return to England. Francis joined the Canadian Over-Seas Expeditionary Force in Montreal on 24 April 1916. Curiously, his Attestation Papers lists a birth date of 10 December 1885, in disagreement with the usually- reliable “Bible Record” which gives a date of 10 December 1882. A check within the GRO records confirms the 1882 date (registration of birth in Q1 1883 at Islington, Vol 1b, Pg 371). It may well be that with the correct date, Francis would be 34 years old and he may have been concerned that he would not be acceptable because of his age.

With an “Apparent Age of 31 years”, 5 ft 11 ¼ in, blue-eyed and brown-haired, Roman Catholic Francis James Birdseye, occupation Clerk, (regimental number 919295) was accepted into the Armed Forces and the family returned to England. It is not known if they travelled together or if Francis “shipped out” with other troops and Frances and Francis (Sonny) travelled on their own. The family re-joined their relatives in Bishops Stortford where the final child, Thomas Leo Birdseye, was born 12 April 1917.

Francis James entered the trenches as a member of the “24th Canadian Batt. Victorian Irish Rifles” on the continent and was killed in action in France on 18 August 1918.

Frances Birdseye (nee Fanning) then returned to Montreal with her two sons sometime after the death of Francis and perhaps even in a hurry to escape the Spanish Flu epidemic. An unconfirmed note within the family indicates that she lived to the age of 74 years before she died in 1957.

A Letter from the Commanding Officer of Francis James Birdseye, who wrote to his wife.. the letter is unfinished..

To write you about your late husband is the hardest thing I have had to do yet, as he was one of the finest, bravest and most cheerful men I have ever met. He was with me all the time he was in this battalion so naturally we got to know each other extra well.

His death was a big surprise to us all especially myself, as I was with him at the time he collapsed and I thought he was only ill, so told him he had better not try to carry on. He was just as cheery as ever and sat joking with us as usual, until we had to push on. I made enquiries later on and heard from the dressing station that he had passed through that there was  nothing seriously wrong with him and when his name appeared in the fatal casualty list we did not know what to think.

I’m writing you, not only for myself, but also for the other members of the platoon. I must say that we miss him keenly, not only because he was the most popular man in the platoon but he just had to have the odd joke no matter how tight a corner we were in or how serious things looked. This was especially noticeable the morning we attacked around Amiens. Some of the men naturally were nervous but your husband was simply wonderful and certainly made it a whole lot easier for the boys to go over the top and a man like that is invaluable out here. Later on the same morning, owing to the heavy mist, we ran into machine gun……. 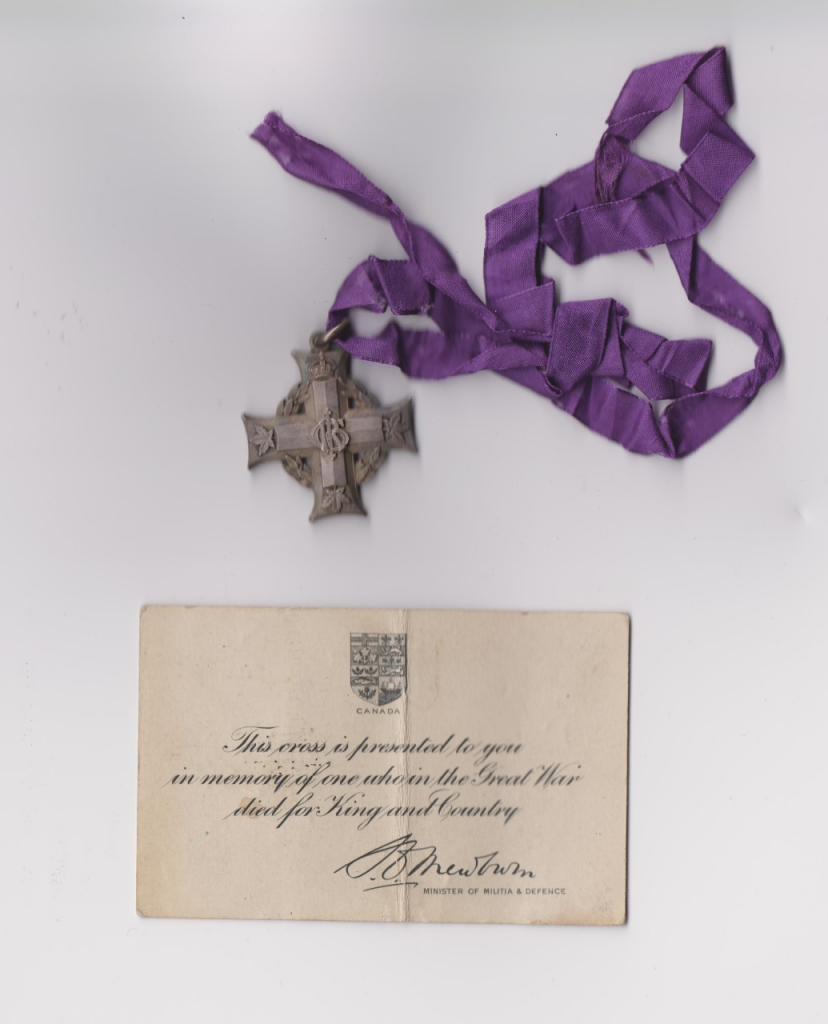 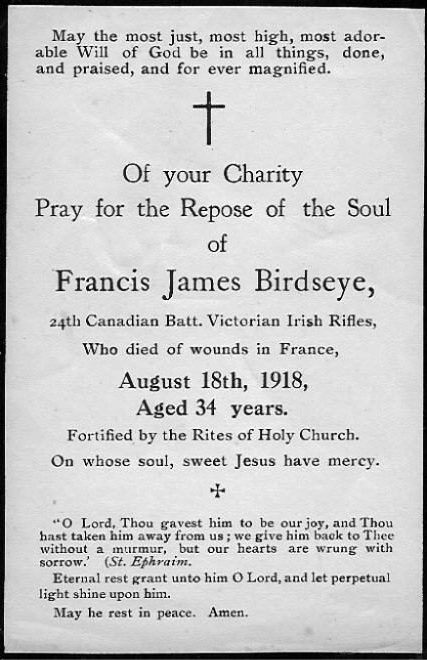 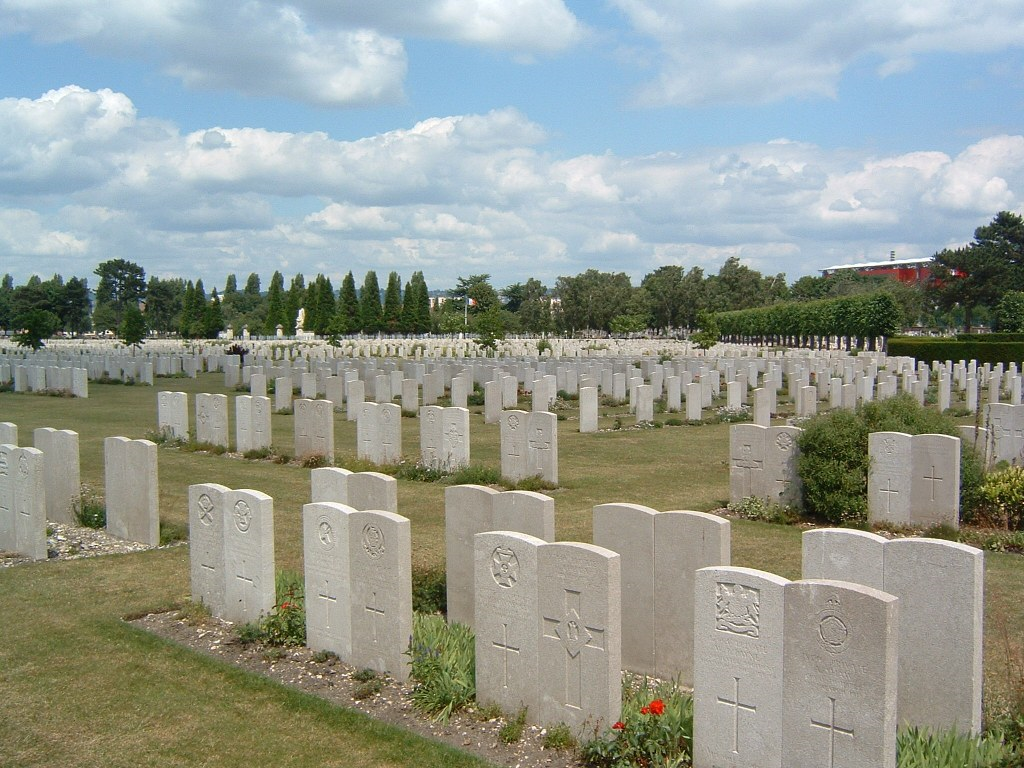 Thomas Gregory Birdseye, an Accountant, was the Organist at St Joseph’s for over 25 years and the brother of Francis James Birdseye. In 1939 the Census shows that he was a widower ( his wife Annie, nee Chapman, pictured below with him, had died in 1918) living at 16 Church Street, Bishop’s Stortford along with his sister Mary Birdseye and daughter Margaret Birdseye and Frances Vailey, who is listed as a retired nurse. 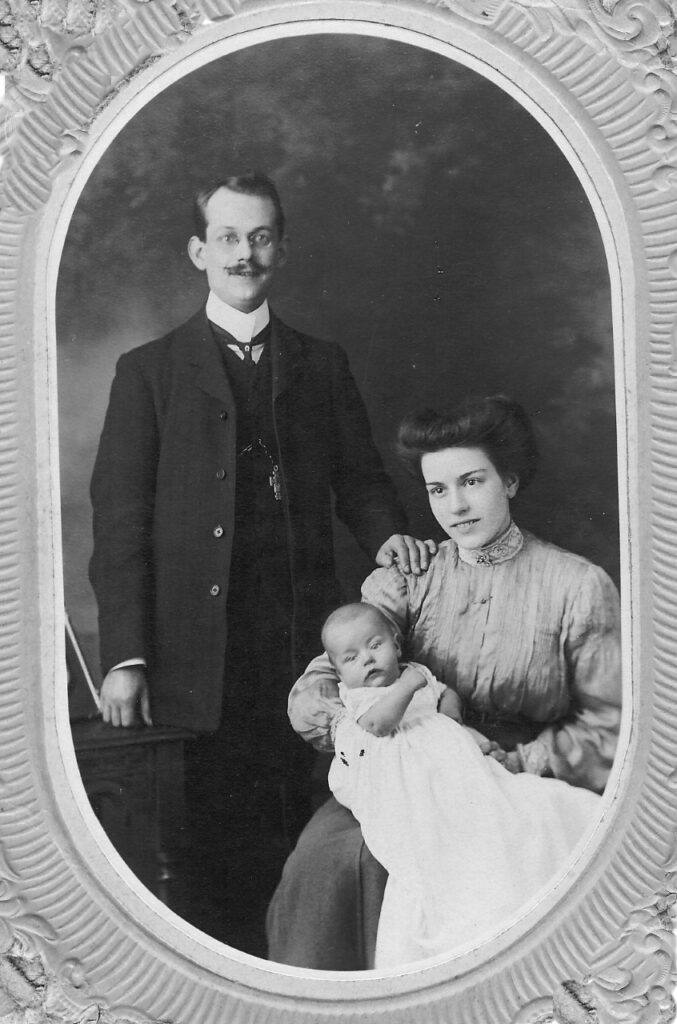 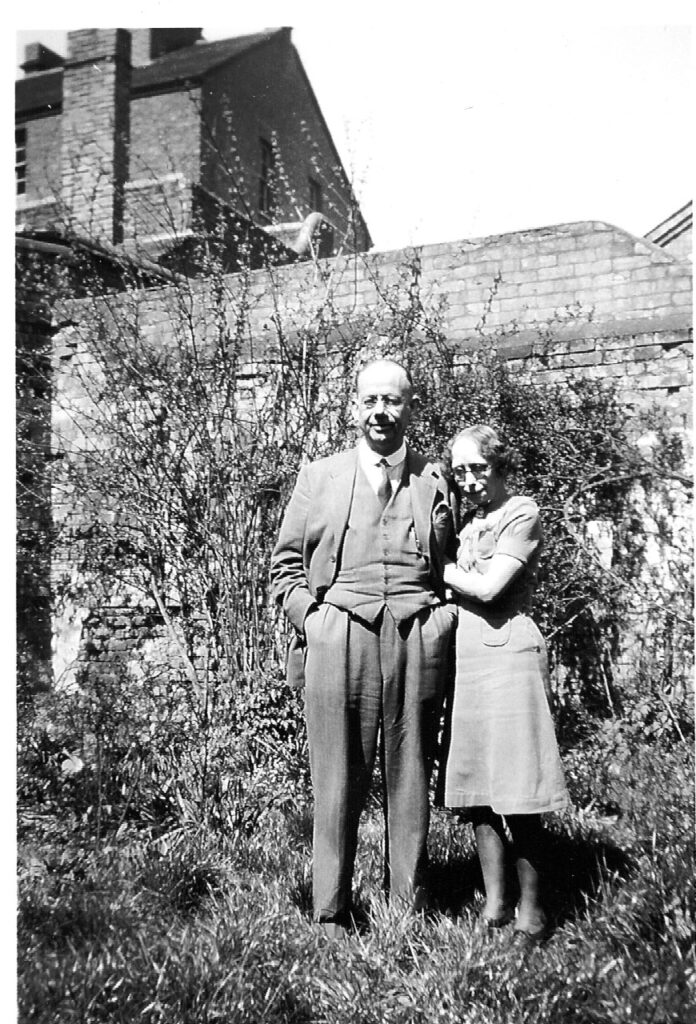 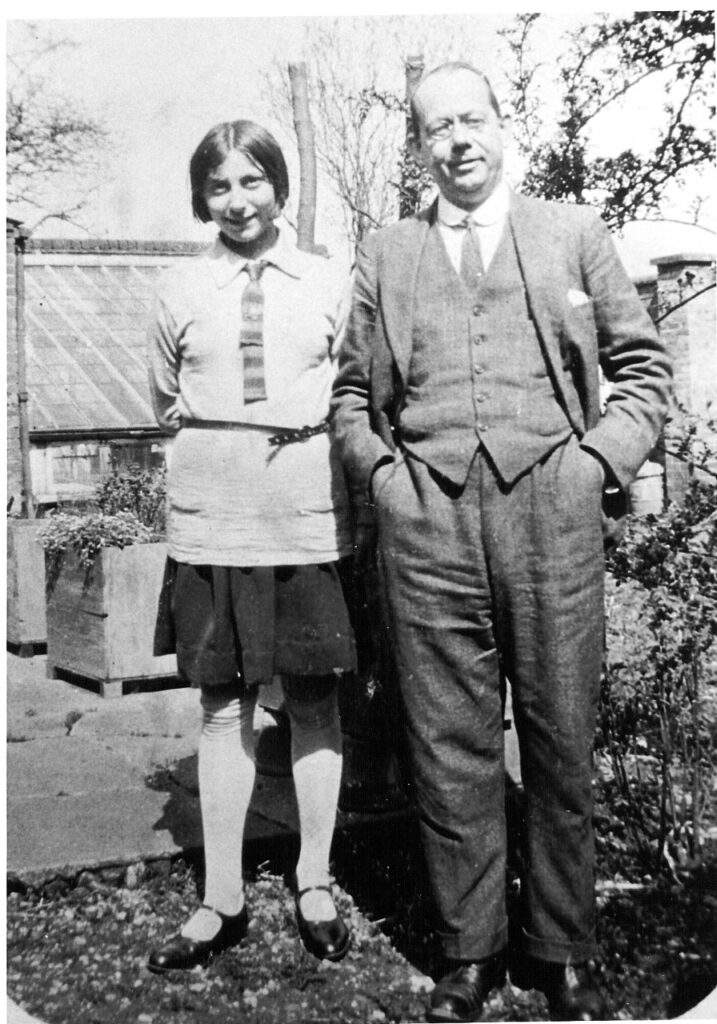 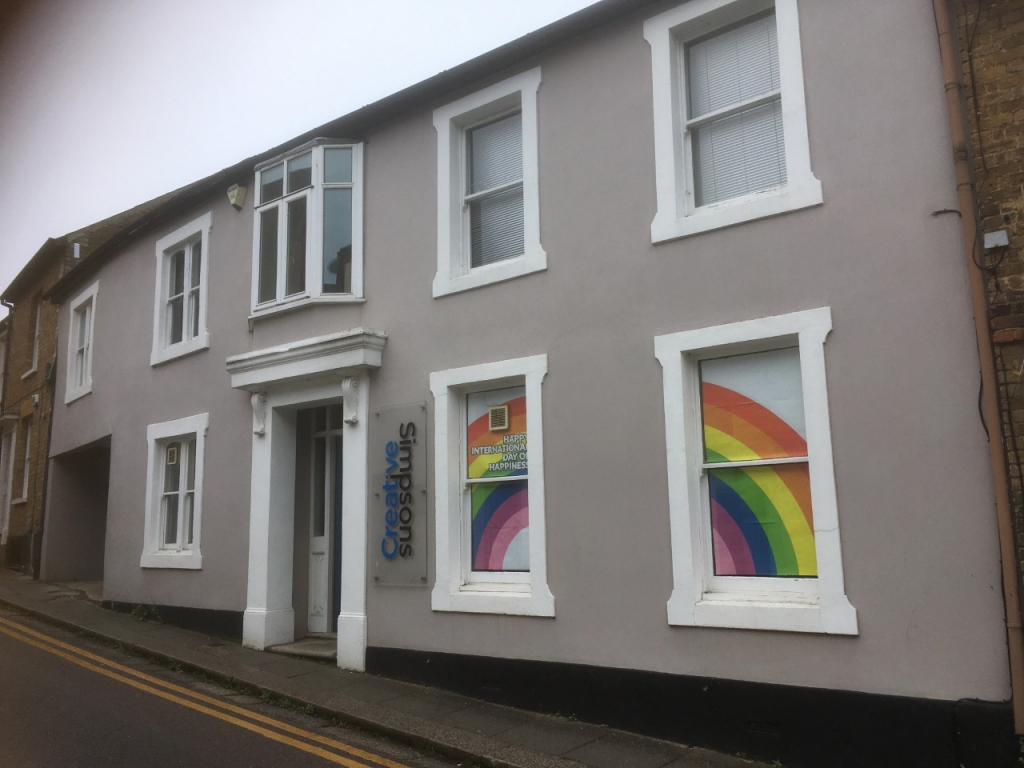 Photograph of 16 Church Street above, which is now a commercial office and former home of the Birdseye family courtesy of Fr Peter Harris 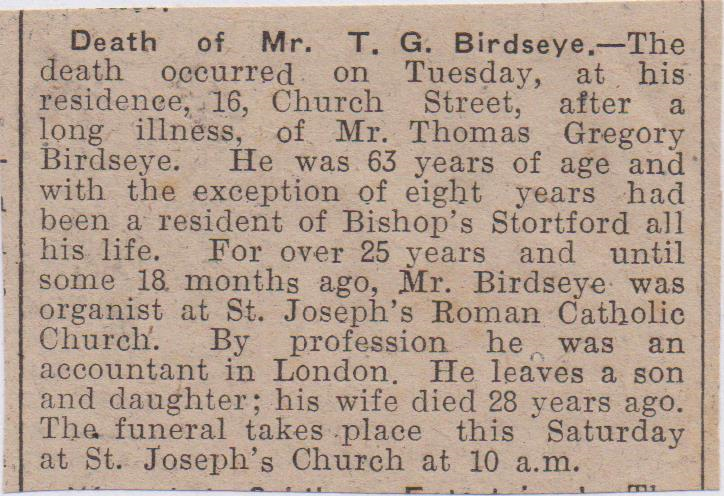 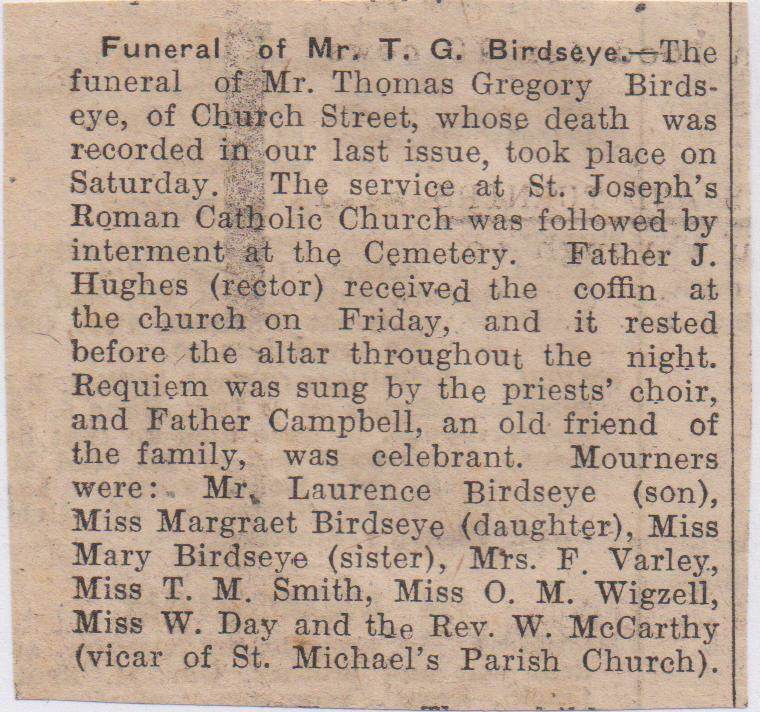 A newspaper cutting of the day providing information of the Requiem Mass for Thomas Birdseye and  naming the Mourners who attended, which included the Vicar of St Michael’s Church. 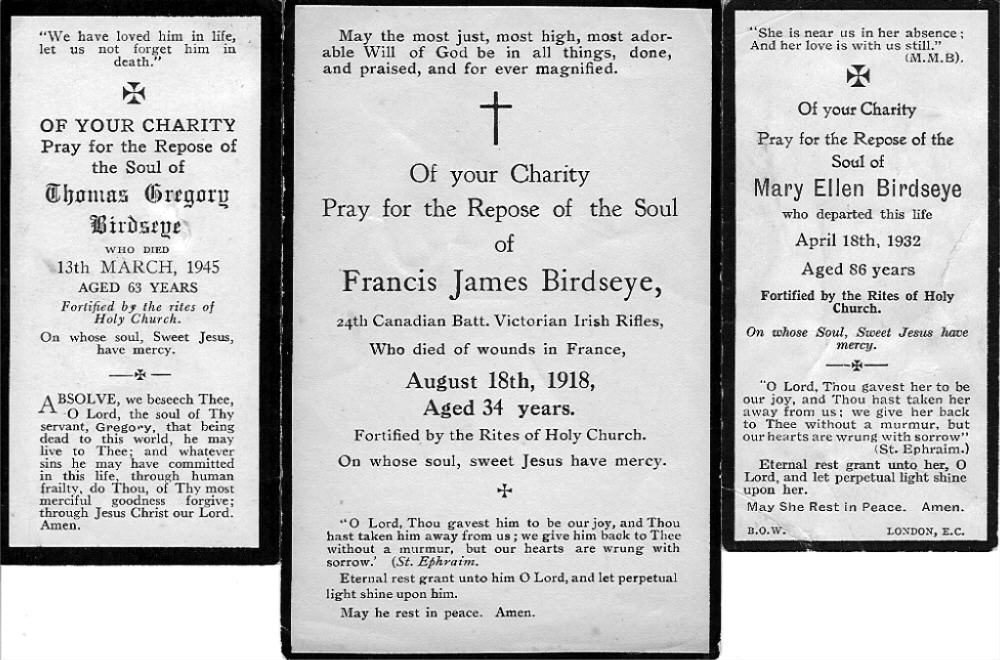 The above Mass cards are those for Thomas Gregory Birdseye, Francis James Birdseye and  Mary Ellen Birdseye ( pictured below as children) 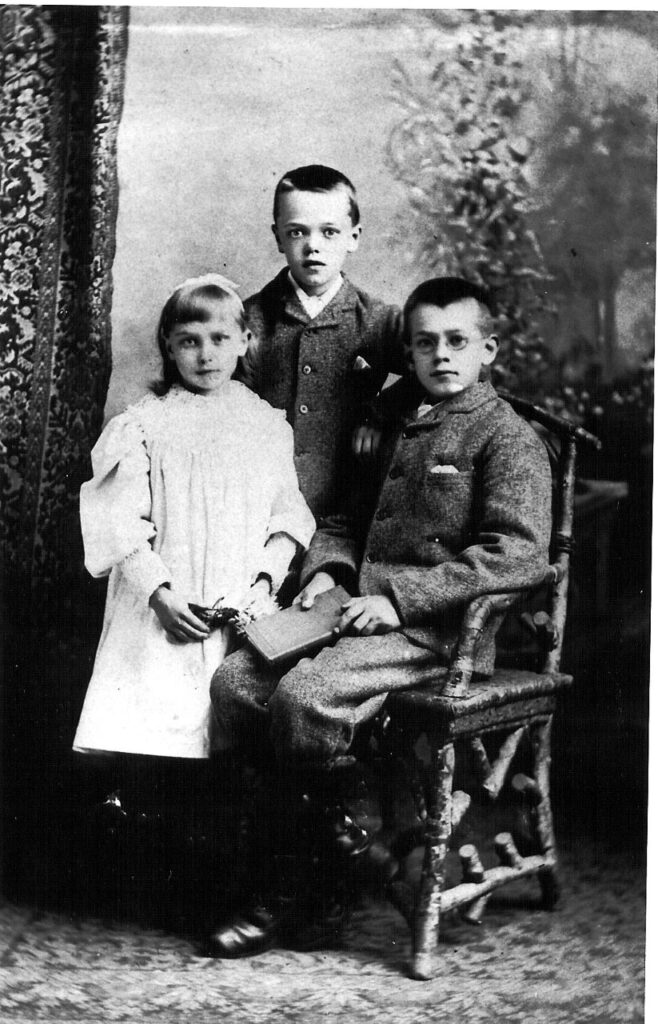 The Stories of the Brave men listed below are still under investigation… and will continue to be updated..

Much of the information has been sourced from Ancestry.co.uk website 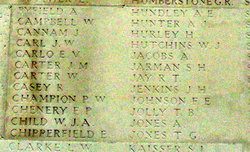 Corporal 842, 1st Battalion, Rile Briagde (Prince Consort’s Own). Died of  his wounds on 26 August 1914 aged 27 years. Born in 1887 and resident in Bishop’s Stortford, he was a  reservist  who enlisted  in Colchester.  He has no known grave but is commemorated on La Ferte-Sous-Jouarre Memorial, Seine-et-Marne, France. Striker, CME Department – 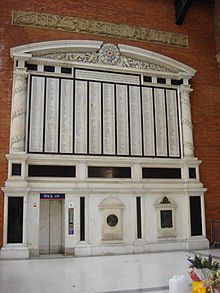 Further research  discovered  a lovely lady called Sue Boney, from Shropshire, who is the 1st cousin, 3rd time removed to Alfred Kitchener. She is also a relative to Frederick and Walter Robinson, which is an amazing coincidence ! Sue has been very helpful and provided the below photograph of Alfred, for which we are very grateful. 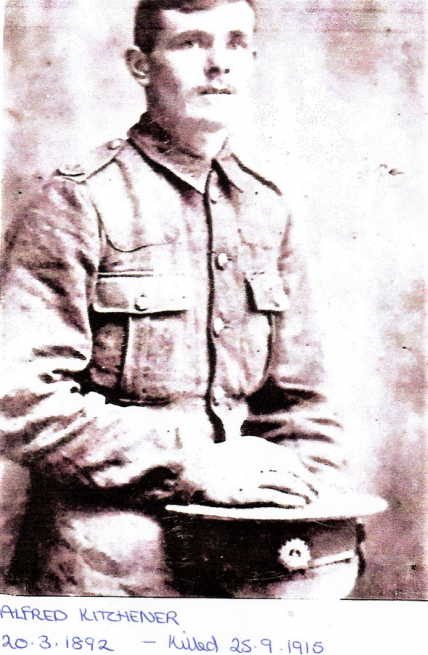 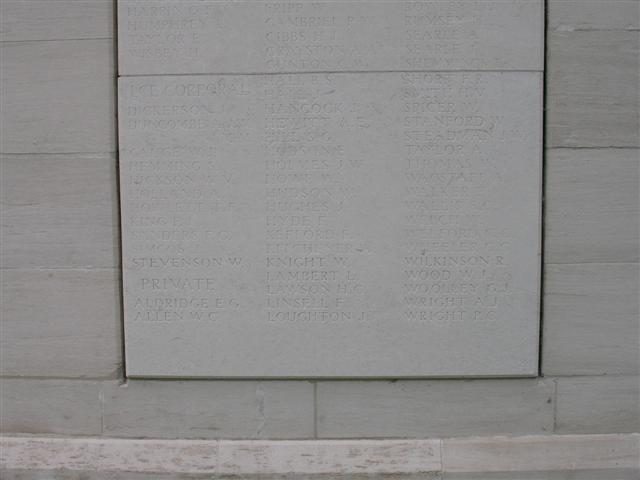 Extract from de Ruvigny’s ROLL OF HONOUR 1914-18 – Part Two – Page 194:
KITCHENER, ALFRED, Private, No. 4/6438, 2nd Battn. (16th Foot) The Bcdfordshire Regt., eldest s. of Alfred Kitchener, of 36, Middle Bow, Bishop’s Stortford, Co. Herts, by his wife, Charlotte, daughter. of Robert Bradford; b. Bishop’s Stortford. co. Herts, 20 March, 1892; educated at the National School there; enlisted 10 Jan. 1911; served five years with the Special Reserve was called up after the outbreak of war 8 Aug. 1914; went to France 1 Nov.; was wounded at the Battle of Neuve Chapelle, but returned to the firing line on 3 April from Rouen Hospital; was reported wounded and missing after the Battle of Loos 25 Sept. 1915. and is now assumed to have been killed in action on that date;

Bernard Percy Marshall  born 19 April 1892 in Ely Cambridgeshire, son of Edward Marshall, a Railway signal fitter and Bridget Langton, married Florence V Lewis on 23rd April 1916 and died on 1 June 1916 aged 24 years old. He was killed in action at the Battle of Jutland. His ship was HMS Turbulent and sadly his body was never recovered for burial. His first service was on 25 August 1911 and his first ship was Pembroke II 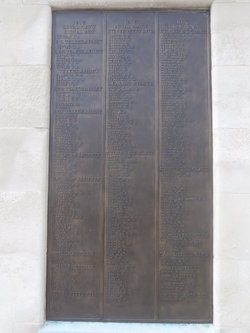 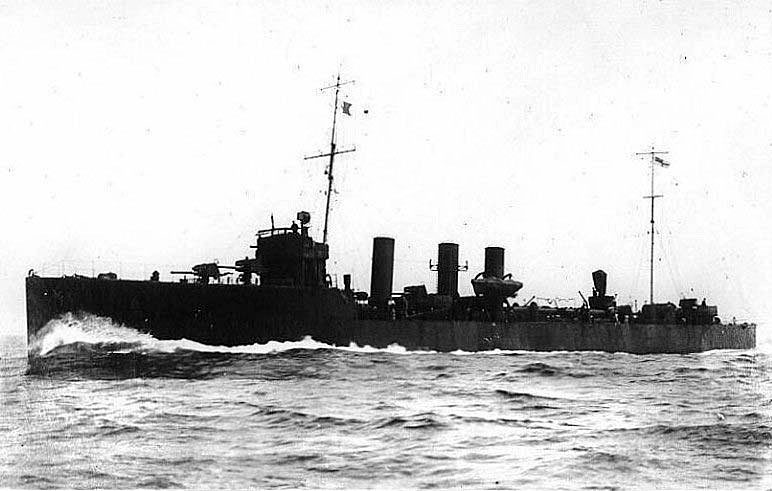 The Destroyer HMS Turbulent was sunk by the German Battleship SMS Westfalen during the early hours of 1st June 1916 during the Battle of Jutland. Only 13 men survived from a crew  of 100 and they were interned as Prisoners of War. 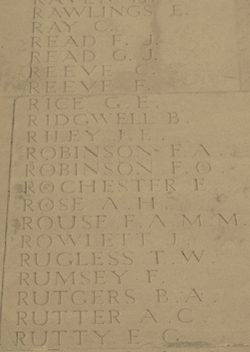 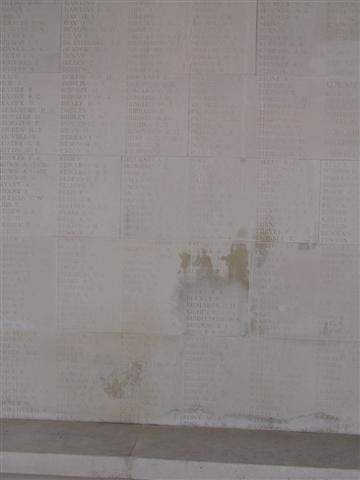 Information from De-Ruvigny’s Roll of Honour 194-18

Private no 12126 (6th) Service Battalion of the Bedfordshire Regiment

Born on 14/6/1891 in Bishop’s Stortford, the eldest twin son of James Odams Sell ,journalist and Laura Harriet Baker of Rosebank,  5 Thornfield Road,Bishop’s Stortford. Educated at St Mary’s Convent and Hockerill. He was a Tobacconist Manager who enlisted early in 1914, served with the Expeditionary Force in France and Flanders from 1915 and died in a field hospital on 10 July 1916 from wounds received in action near Fricourt the same day. Buried in the cemetery near Albert. A Comrade wrote: ” On one occasion whilst out with his officer he showed great pluck and coolness when one of our parties ran into a German patrol. For this he was recommended to our Commanding Officer”. He was a keen football player and Vice Captain of Bishop’s Stortford Football Club 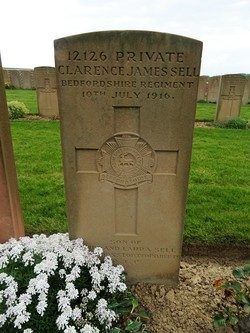